DEVELOPMENT OF THE CARFLOAT TRANSFER BRIDGE IN NEW YORK HARBOR 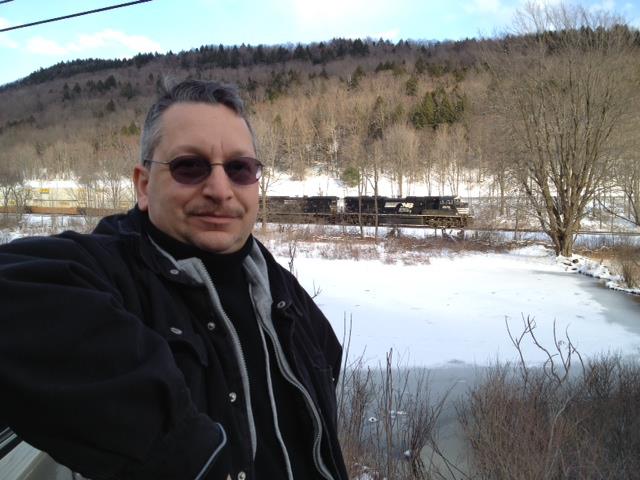 During summer vacation, my family spent a week or so almost every year in Strasburg, Pennsylvania. Obviously, this meant I was constantly around operating steam locomotives which as you can imagine; never grew boring. Matter of fact, this repetitive exposure helped develop my affinity for steam locomotives. We would usually shoehorn a day or two at Horseshoe Curve in Altoona as well. Oddly though, Dad never seemed to travel the few extra miles to the Gallitzin Tunnels, and I never got to ask him why.

Throughout my early years, I think I must have visited about 90% of the museums and tourist railroads in the Northeast.

In my mid 20's, I had the pleasure of assisting Robert Diamond organize the fledgling Brooklyn Historical Railway Museum, when it first getting set up in 1993 on the Van Brunt Street Pier in Brooklyn, NY. We met through the coincidence of our both trying to save BEDT #16 from Kent Avenue. From then until and through 1996, I helped hose out the former warehouse of pigeon droppings, set up industrial shelving and catalog street car parts, run electrical lighting and maintain both the generator sets: a 4 cylinder Hercules / Winpower believed to be from the NIKE Missile Site on Staten Island, as well as the 8V71 superturbocharged set donated to the BHRA from the LIRR. I also assisted in rebuilding the stairs in the Atlantic Avenue Tunnel, as well as construct cribbing for the cut granite wall in anticiapted excavation for the locomotive believed to be hidden behind that wall in the tunnel.

In those years; he, my father and I went to SEPTA in Philadelphia to pick up their donation of a partial spool of solid copper trolley wire. On another occasion, he and I and several other of his acquaintences crammed into a rented car and tooled down to Amtrak Baltimore Station to palletize several thousand of the paving stones from the station platforms for shipment back to Brooklyn. This took place on my birthday in the middle of torrential thunderstorms! In July of that year, we made out way to Long Island Railroad Oyster Bay Yard, to load 600 relay railroad cross ties which were donated to the BHRA, as well as pick up some donated rail from the NYCTA 36th Street Yard. The sacrifices I make!

One of my fondest memories is learning how to operate Oslo #3; a genuine museum piece and is an overhead electric four wheel trolley built in 1897 by Mann-Schukert in Germany; for use in Olso, Norway. At the time it was on loan to the BHRA and operated on short section of track in the Van Brunt Street warehouse. This car is currently located at the Trolley Museum of New York, in Kingston, NY. Speaking of the TMNY, and after my relocation to upstate NY, I joined their organization and became certified to operate #358 (ex-Johnstown, PA), a 1925 St. Louis Car Foundry (now reconfigured as self propelled diesel). I am also certified to operate railcars through the North American Rail Car Owners Association (NARCOA).

As it is every railfans sworn duty to try and finagle a cab ride as often as possible, but in this modern litigious society, corporations frown upon it to the point of even issuing penalties for crews; so such opportunities rarely occur on spur of the moment. That is, unless you either know someone higher up in the food chain or you are just exceptionally lucky, of course. At least one (usually the later), but often both applies to me. So, not to be overlooked are the numerous "discreet" cab rides I have received from active duty employees on my local Class 1's and 2's, even if it was only from one end of the yard to another. I won't go into details to protect the crew from possible disciplinary action, but these guys were friendly enough and remote enough to know how to make a rail enthusiast smile, and they have my utmost gratitude.

I have also been fortunate to have had a cab ride in Catskill Mountain Railroad #407 [ALCo S1]. This actually means a bit to me, as this locomotive is as close as I'll ever get to an operating former carfloating / rail-marine terminal locomotive, due to the fact that: 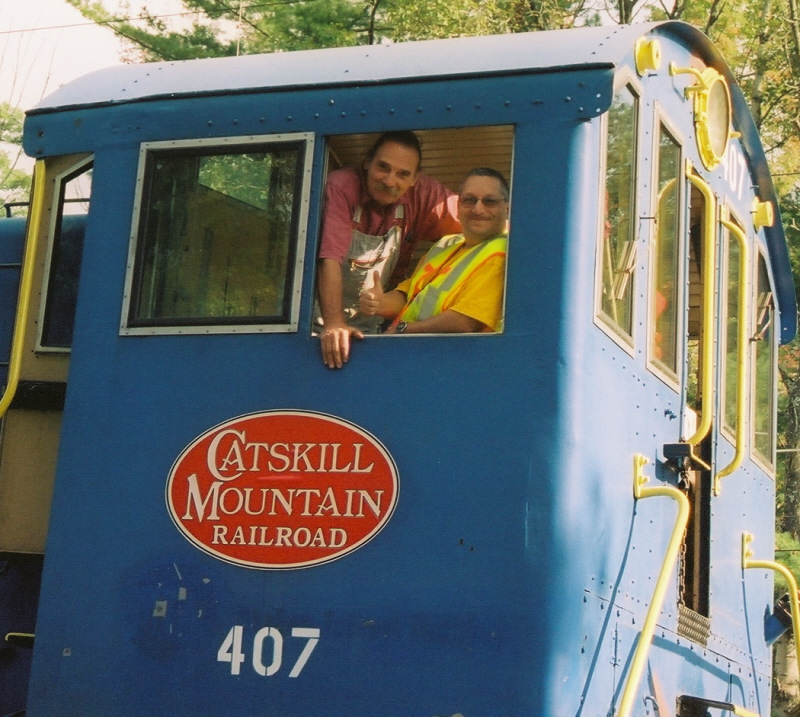 
But, there is nothing like cab riding a steam locomotive. I vaguely recall riding a steam locomotive as child, but not sure of when or where. Doubt it was Strasburg. Steamtown in Vermont perhaps or Morris County Central? I cannot say for sure. But, in September 2013, I had the very distinct pleasure of riding in the cab of Texas State Railroad #316 (4-6-0). Texas heat is just a tad more bearable (or maybe unnoticeable!) in the cab of steam locomotive. If one is going to roast, you might as well enjoy it!

Deborah, my better half of railfanning purchased a cab ride for me as an anniversary present. This worked out to her favor as well, because it was the last run of the day and after we arrived in Palestine, the crew invited her up as well for the run to the enginehouse.

I have also been at one point or another, to some degree or another; involved in the cosmetic restorations of Brooklyn Eastern District Terminal #14 and #16.

Railfanning usually involves an interest in photography, and I am not exempt from this.

As for my photographic equipment, after my Yashica GT mentioned above, I eventually graduated to an Olympus Pen-FT 35mm Half Frame SLR with 50-90mm f3.5-4.5 zoom lens around 1980 or so. Unfortunately, as I grew older and graduated high school my interests matured and changed, and I drifted away from railfanning in 1983 with a coinciding hiatus in photography as well.

In 1995 however, I developed an interest in NASCAR Winston Cup Racing and my manual focus Olympus body just was not cutting it for high speed action photography. So, I purchased my first autofocus SLR: a used Minolta Maxxum 8000i. I added two 7000i's to the camera bag over the next few years. But from the get go, my used camera salesman (for both his commission and my image quality) convinced me to always invest in better lenses. So, as a result I purchased higher end / professional, fast focal ratio lenses: Minolta 50mm f1.4, Tamron 70-210mm f2.8 SP LD IF, Minolta 85mm f1.4 and so on. These better lenses allowed me to dabble in modelling photography, and apparently my skill was satisfactory enough to attain a position in Ford for Children Modeling Agency for a friends son for a modelling contract.

In 1999, after I relocated to upstate New York the previous year, I became a member of a pit crew for a friend's DIRT Motorsports 358 Modified racecar. By proxy, I became the "team photographer" as well as some freelance photography work at Accord Speedway when the regular track photographer wasn't available.

In 2003 or so, my interests in railfanning were rekindled, and I also became more serious about my camera equipment. I upgraded to a Minolta Maxxum 9 (with vertical grip) in 2008 and purchased a Minolta 28-70 f2.8G to accompany it. But, I remained a stalwart film user. Come hell or high water, I was going to be dragged screaming and kicking into digital photography era. That wouldn't take place until 2010.

I made the switch to digital, and I started with a Sony a350, which utilized all my high end Minolta lenses. By 2012, I added a Sony a700 to the camera bag. About that same time, while I was railfanning on the Poughkeepsie Railroad Bridge (it having been converted to the linear park "Walkway Over The Hudson"), my Minolta 28-70 f2.8G "committed suicide" by jumping out of my camera bag and onto the concrete deck. Unfortunately, it was not salvageable.

I replaced it with a Tamron 18-270mm f3.5-6.3 Di II PZD for "all in one" portability, but in the end I found I could not live without low light capability of a fast lens and went back to a two body system. So in 2015, I purchased a Sony a900 Full Frame DLSR. All my DSLR's have a vertical grip mounted for extra battery capacity and vertical controls.

At this time, I also commenced in updating my lenses either as a result of age or as stated above; attrition. So, I retired my trusty Tamron 70-210 f2.8 and bit the bullet and shelled out for a Sony 70-400 f4-5.6 SSM GII. This lens is my workhorse.

I am not so serious about videography, and shoot it when as the situation requires. Currently, I have a Sony HD-CX440 for times I require zoom, but most of the time I just video on my iPhone 8. Both mounted on tripods of course.

I am also extremely fortunate that my fiancèe Deborah is almost as interested in railfanning as I am, and whom I might add very conveniently lives next to the BNSF Red River Division / Houston Subdivision in Flynn, Texas!

This allowed me to get away from my local roads CSX, CP, NYS&W and NS here in New York; and catch some UP, BNSF and KCS in action on their turf; as well as all the interesting industrial operations down there. That is before I moved down there full time! 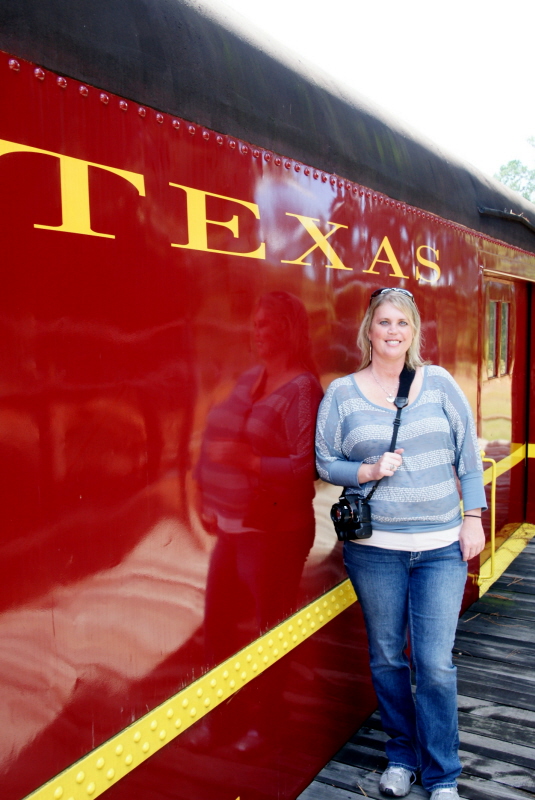 My railfanning interests have extended further from just taking images of trains to the point I now collect current & obsolete Employee Timetables as well as Track Charts for the locations of my railfanning.

I am also an ardent collector of railroad memorabilia & ephemera from the railroads that operated where I have lived near (Brooklyn, NY; Margaretville, NY; and now Flynn, TX) including but not limited to: New York City Transit System, and now the Trinity & Brazos Valley, Burlington-Rock Island Railroads.

Before moving down to Flynn permanently, I would take Amtrak between Texas & New York and "let someone else do the driving". This allows me to shoot the trackside industries and shortlines along the route, not to mention railfanning Chicago during layovers between trains.

On occasion I will splurge and rent a sleeper instead of coaching it!

I am a member of National Association of Railroad Passengers (NARP), and I am a strong advocate of AMTRAK, and passenger railroad transportation as a whole as well as freight railroads. 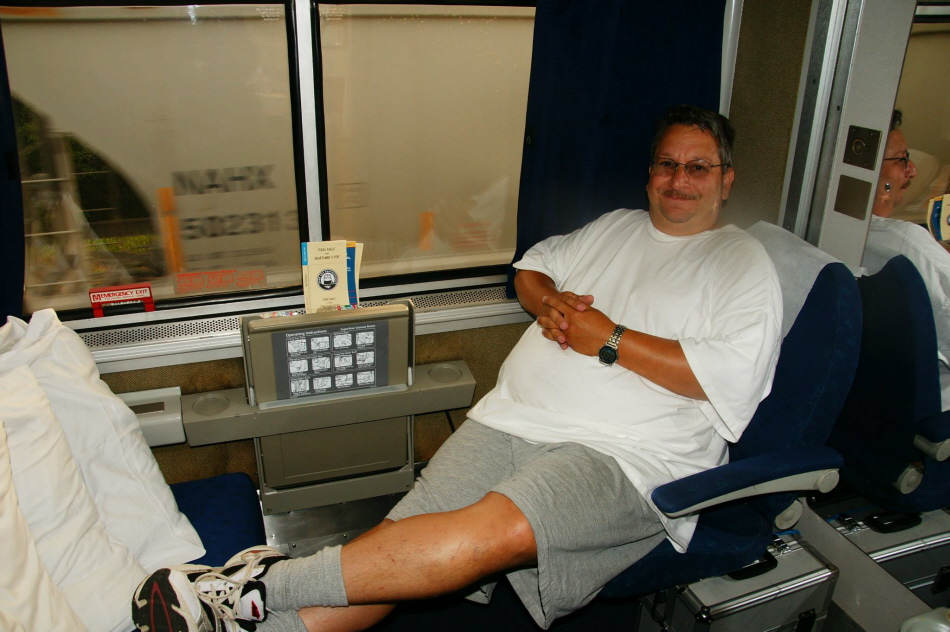 
I continue to be an avid railfan and I am constantly exploring and visiting new locations to add to my "list" as well as scratch off items on my "bucket list".

These locations can reviewed below in my list of the railroads, locations and railroad museums I have either visited, photographed, and in some cases had the opportunity to ride as a passenger.

My railfanning images & videos (as well as other topics) are shared on FLICKR, YouTube and Railroad Picture Archives, as well as many diverse groups and pages on Facebook:

Currently, as a result of my research and this website, either in part or in whole; has found its way to serving the public through the following agencies, publications and preservation groups, either by contribution or consultation:

.
In addition to the research of, and collecting photographs and memorabilia from Brooklyn Eastern District Terminal, my other railroad related hobbies and interests include:

Currently, my full time occupation (unpaid) is research and historian of Industrial & Offline Terminal Railroads of Brooklyn, Queens, Staten Island, Bronx and Manhattan; and as a result, maintaining the websites and page associated with this research.

Other times, when funds and time permit; I can be found chasing trains and since relocating to Flynn, Texas in November 2017; I find myself doing some freelance photo journalism for local newspapers.

Should you find the need to contact me, please feel free to email or call me: