Several dedicated BEDT fans requested that I create a "Model Page", to showcase the growing interest in modelling the BEDT.

So by popular request, I have done such. All are invited to submit .jpg photo(s) of their BEDT models! Models from any era, in any scale, and in any phase of completion. All submissions will be listed on this subpage with a link in the Main Index.

With your photos, please include name, manufacturer of model or major components used in scratchbuilding your model, time in construction, and other details you would like listed (types / colors of paint, superdetail parts, etc.)

To submit your model, for more information or for suggestions, please email me through link below. 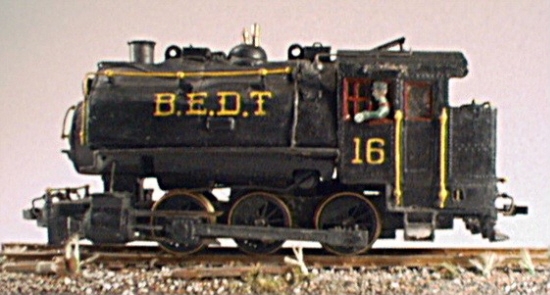 Because I am left handed, I make it a point to mount the engineer's on the wrong side of the cab for all my kitbashed and scratchbuilt models...

Ok, so lapse forward to October 2009, when Jose Feliciano sends me a Proto 2000 S1 in trade for some NYCTA material. After digging out my airbrush, superdetailing parts and ordering new paints, I decide to start work on a prototypically correct BEDT S1 (or as close as I can get!)

As I am partial to the very first dark blue / yellow scheme that #21 was originally painted in, and due to the fact this scheme was short lived, was the deciding factor in my choice for scheme..

Some details on the factory model needed to be corrected first or added to conform to the actual S1 used by BEDT:

1) the front and rear handrails did not extend down to the second step as the later Phase 1 Alco S1's were;
2) the peaked rain gutter on the cab roof;
3) the custom sunshades over the windows;
4) the stack cap hold down pegs;
5) the radiator shutter control box;
6) step / platform lights on rear of cab;
7) dent on engineers side rear bottom corner of cab;

I also took great pains to design prototypically correct decals for all the locomotives, which are currently being tweaked by a professional decal manufacturer via a vector graphics program.

This is a work in progress, and is by no means final.

.#22 is a Proto 2000 and is a stock chassis & body. #26 is a Atlas S2 converted to S1 with Smokey Valley hood. Both have 88 tread wheels by North West Shortline. Paint is Model Flex Conrail Blue with custom (private) decals, handrails are Pactra Bright Yellow. Grab irons (brass wire) are hand bent. Couplers are Semi Scale Kadee #58. Engineer on #22 is factory, #26 is Labelle Industries.

Owner is aware that #26 is not prototypically correct (#26 never had lettering on engine doors).

This tug started out as a Walthers Cornerstone kit. While the prototype is based off a Lehigh Valley protoype, this tug has been modified to reflect the original NYNH&H ownership of the BEDT tugs. This includes removal and relocation for the steering tubes, rebuilding of the "H" bitts, removal and rebuild of the line lockers, installation of the canopy on the boat deck, and other numerous details still to be added when complete.

Andrew Browne of the UK is modelling the New York Dock Fulton Terminal, but that did not stop him from modelling other pieces of equipment from other Brooklyn Offline Terminals that would be seen at the Fulton Terminal! 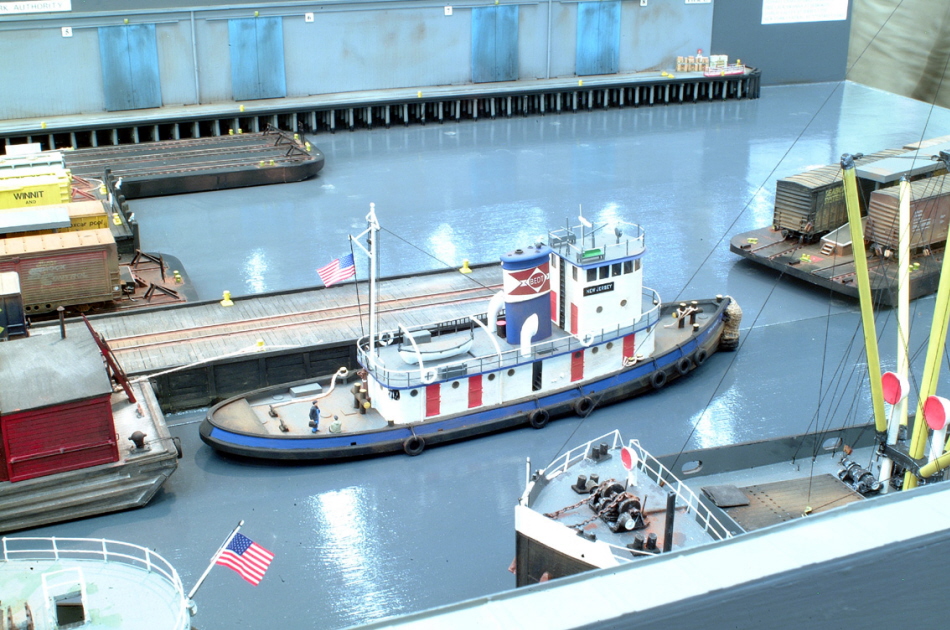