So, before we get started, Iona Island was not in the New York Metropolitan Area, but like Fort Terry located in Suffolk County, it had a railroad. And Iona was just north of the City of New York. Perhaps most importantly, Iona Island served the New York Metropolitan Area as this was where the Naval Munitions were stored and or assembled for those ships under construction, refit or scrapping at the Brooklyn Navy Yard.

This made it worthy of inclusion on this website. I'm only sorry I didn't add it sooner! 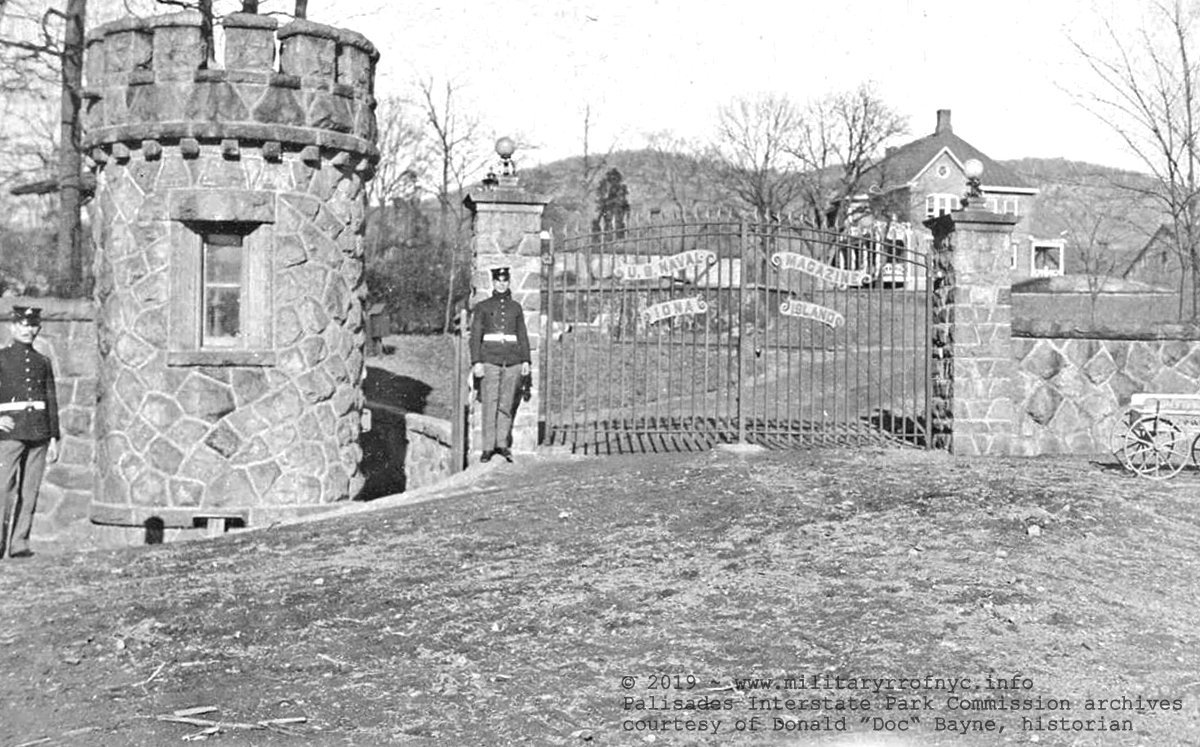 The original name was Weyant's Island, and during the 1860's was home to a nursery and vineyard. The Iona grape was propagated here and gave a new name to the island. The owner of the vineyard failed in his business endeavors and at which time the Navy purchased the property totaling 115.8 acres for the sum of $160,000; to store munitions, gunpowder and explosives, and inspect same.

This facility was directly associated with the Brooklyn Navy Yard as evidenced by the following document: 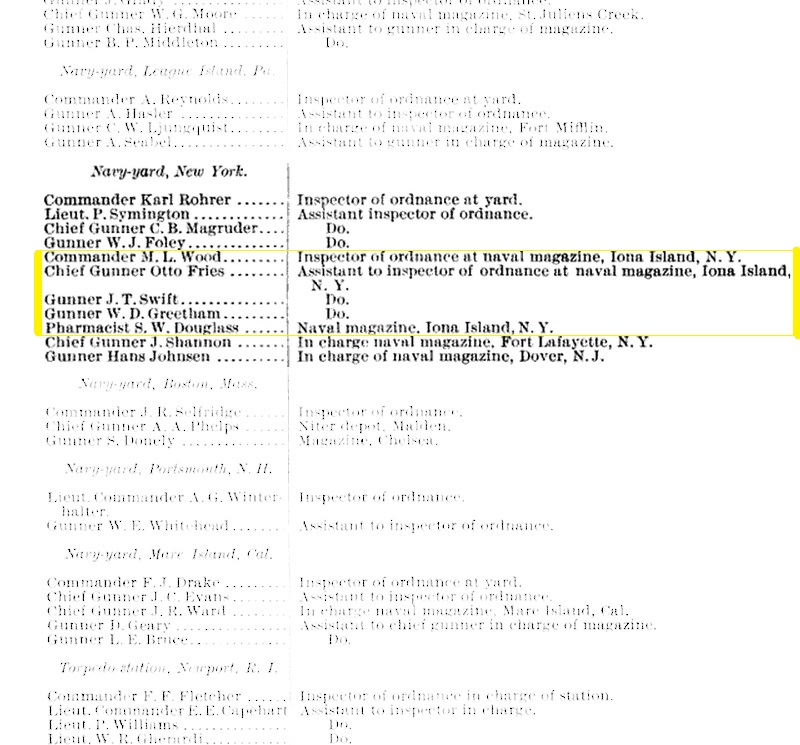 There were two outstanding reasons for Iona Island Naval Munitions Depot to be created. The first: munitions, shells and other explosives were not allowed to be stored in the New York City proper, and with good reason. Historical records show many devastating munition / armament explosions taking place in urban centers, all too often with catastrophic devastation and loss of life. 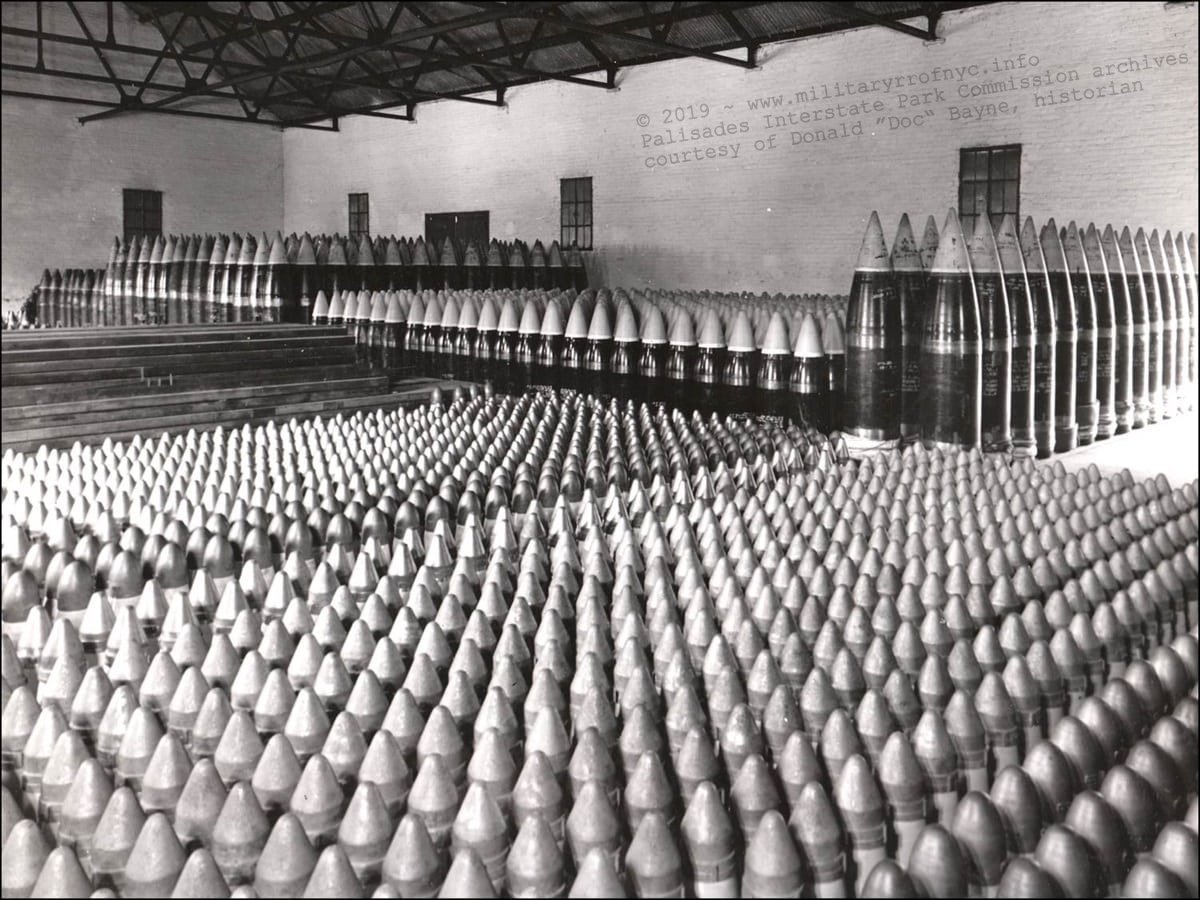 Even this did not alleviate the risk completely because on 05 November 1903, munitions workers had trouble removing a fuse and forced the issue using a wrench. The shell exploded, setting off thousands of others. Six men were killed and almost every building damaged or destroyed to some degree. The explosion occurred between Shell Houses 3 and 4 (former Buildings Nos. 210 and 209, respectively).

One could only imagine the consequences, had this explosion taken place in a densely populated area of say the Brooklyn Navy Yard. The explosion was a major newsworthy event and carried in newspapers across the United States:

The second reason for the location of Iona Island was that it was sufficiently inland to be protected from attack or bombardment by seagoing forces, yet connected to a navigable waterway, that being the Hudson River. A contributing factor to its location was its proximity to a railroad trunk line; the West Shore Railroad.

On December 6, 1916, the Navy Department in Washington, D.C. issued General Order 254, thereby changing the names of all "Naval Magazine" to "Naval Ammunition Depot".

The following is a Naval Record from World War I show a tally of munitions prepared at Iona: 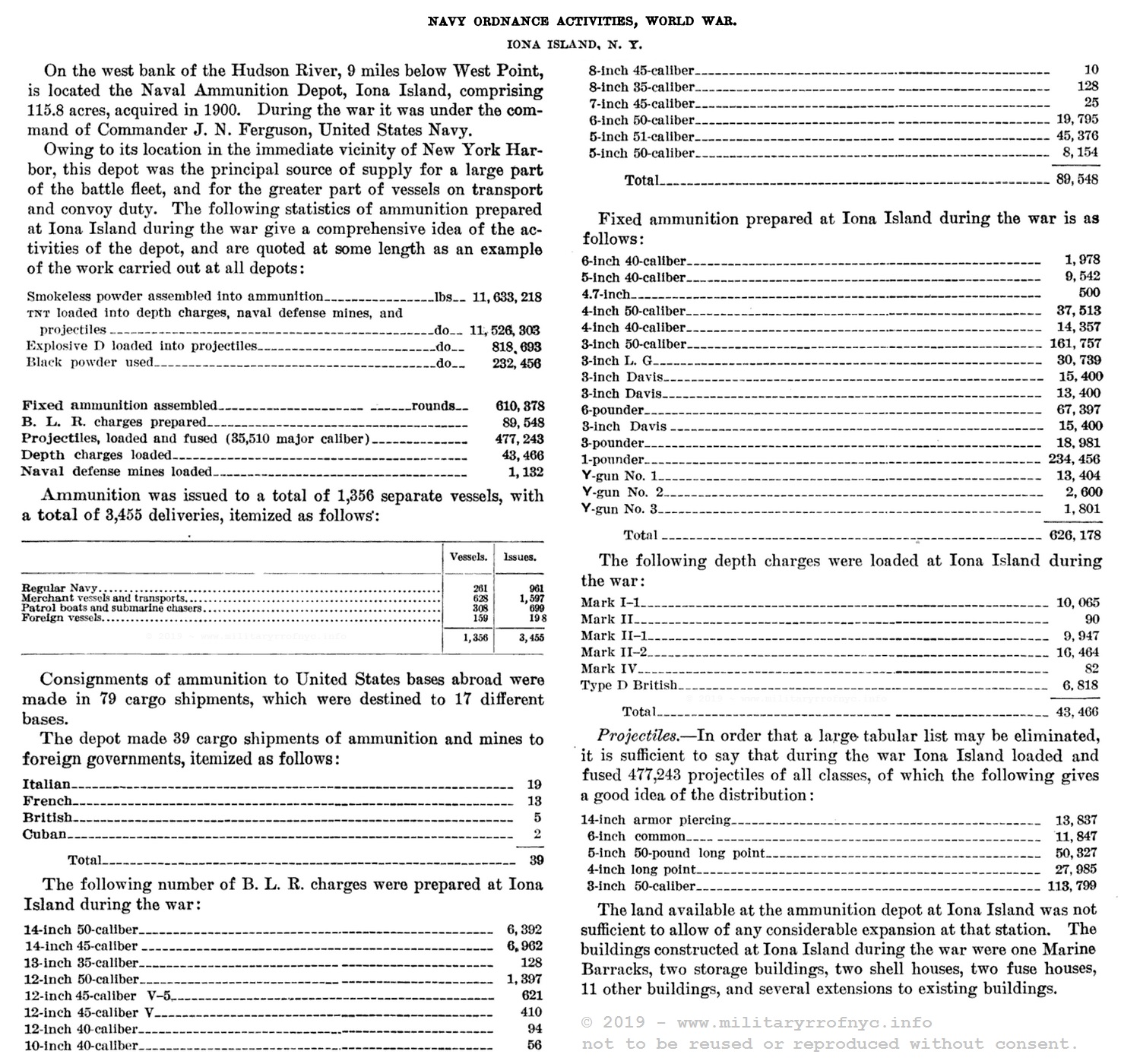 The Navy ultimately constructed 164 buildings, to include: a hospital, firehouse, guardhouse, barracks, officers’ quarters, icehouse, inspection buildings, recreational facilities, powerhouse, wharves, as well as the intended shell and powder buildings and storage magazines. To efficiently serve the facility and move the munitions, an internal rail network was constructed linking the magazines with the other buildings.

The base was secured with tall iron fencing, guard towers along the land side and a U. S. Marine Corps detachment for patrols.

The southeastern part of the island, is known as Round Island. It was originally separated from Iona by marshes and at one time was a privately owned quarry that supplied stone for the Brooklyn Bridge. Round Island would be purchased by the US Navy in 1942, and the construction of 20 additional magazines as well as a dock would be added. These can be seen in the first of two aerial images, seen below. Also take note the two track mainline of the West Shore Railroad with passing sidings for the Iona Island Station. This dates the image to before 1958 and prior to the cessation of passenger service on the West Shore.

You may click on the image below for larger size. 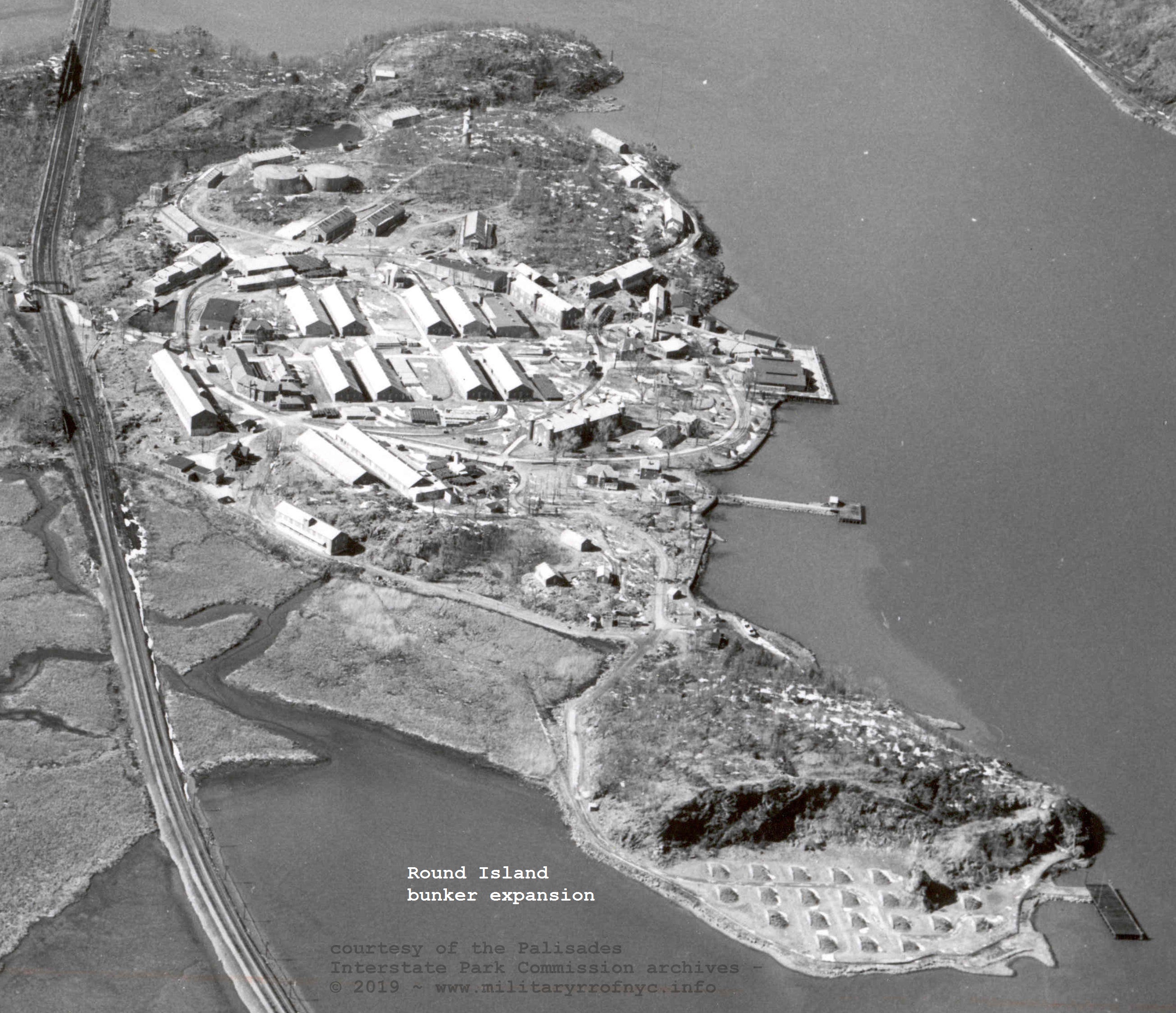 In this next image, unfortunately undated, the West Shore Railroad has been reduced to single track. That and the presence of the small internal combustion type industrial locomotive on the Iona Island lead track leads the author to the conclusion this image is dated circa late 1950' or early 1960's. 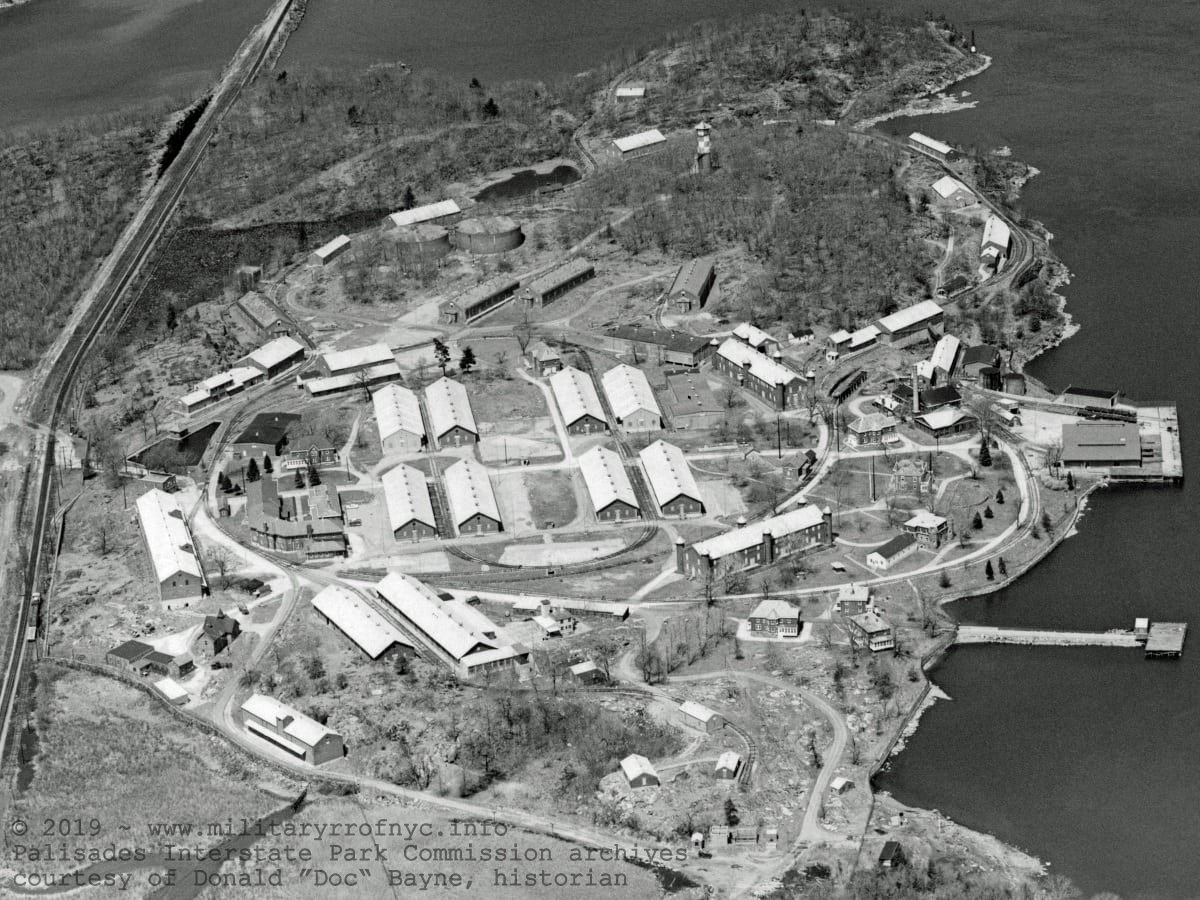 Iona Island would serve the United States Navy from its construction, through World War I and until just after World War II, as well as several minor actions throughout the world between World Wars I and II.

The manner in which Iona Island worked, was that an armed U.S. Naval vessel (either surface or submarine) with its compliment of munitions would sail north up the Hudson River to Iona Island and dock. Munitions would then be offloaded at their wharf. When this task completed, the vessel would sail south down the Hudson River, around the Battery at the southern tip of Manhattan, and up the East River to the Brooklyn Navy Yard for repair or refit. Upon completion of that refit, the process to rearm was reversed.

A newly commissioned vessel would simply be launched at the Brooklyn Navy Yard, sail around Manhattan up the Hudson to Iona Island, be fitted out with appropriate munitions. Then sail back south down the Hudson and then sail for open sea for active duty.

With the evolution of air power and newer methods of warfare saw a diminished threat of coastal naval attacks. This and World War II, led to the creation and construction of Earle Naval Weapons Station (just inland from Asbury Park, NJ). This location, which was still sufficiently far from the population center of New York City, but significantly more convenient to New York Harbor, by being located practically at the entrance to it. Following the commissioning of Earle Naval Weapons Station in 1943, Iona Island Naval Ammunition Depot was deactivated in 1947.

Iona Island would not be sold to the Palisades Interstate Park Commission until 1965, so the activity (if any) of Iona Island from 1947 to 1965 remains unknown.

The island and its adjacent marsh were designated a National Natural Landmark in May 1974, and it is part of the Hudson River National Estuarine Research Reserve. It serves mainly as a bird sanctuary, particularly known as a winter nesting place for bald eagles.

Most of the island is still off limits to general visitation, but the unsecured parts are frequented by bird watchers, hikers, naturalists and railfans. Yes, railfans. This is due to the fact that the CSX Albany Division / River Subdivision runs through the western part of the island, and is a popular photographic location! This line is formerly the New York West Shore & Buffalo Railroad, soon to be absorbed into the New York Central and known as the West Shore Railroad, (1880-1968), then Penn Central (1968-1976), Conrail (1976 - 1999) and presently CSX.

The railroad network at the Iona Island Naval Ammunition Depot was typical of small military installations, and not elaborate.

However, it appears due to its close proximity to the West Shore Railroad mainline, Iona Island was fortuitous to have been accorded its own station. This image raises questions. As seen in the post 1942 aerial image as well as the 1944 valuation map, the Iona Island Station for the West Shore R.R. was located on the west side of line. However, and judging from the background in this image (with the N.A.D. buildings in the background), this image below is facing southeast. The telegraph lines in this area along the West Shore were also located on the east side of the tracks. So, there may have been an earlier incarnation of the Iona Island Station for the West Shore R. R. originally on the east side.

Iona Island was also the site of a significant train wreck on 06 July 1927. A local West Shore freight train was rear ended by a southbound New York Ontario & Western vacationers express (NYO&W had trackage rights). Cars of the passenger train telescoped one another in the impact. United States Marines from the Naval Depot were among the first to arrive and render aid. More about this accident can be read in detail here: Iona Island Train Wreck. 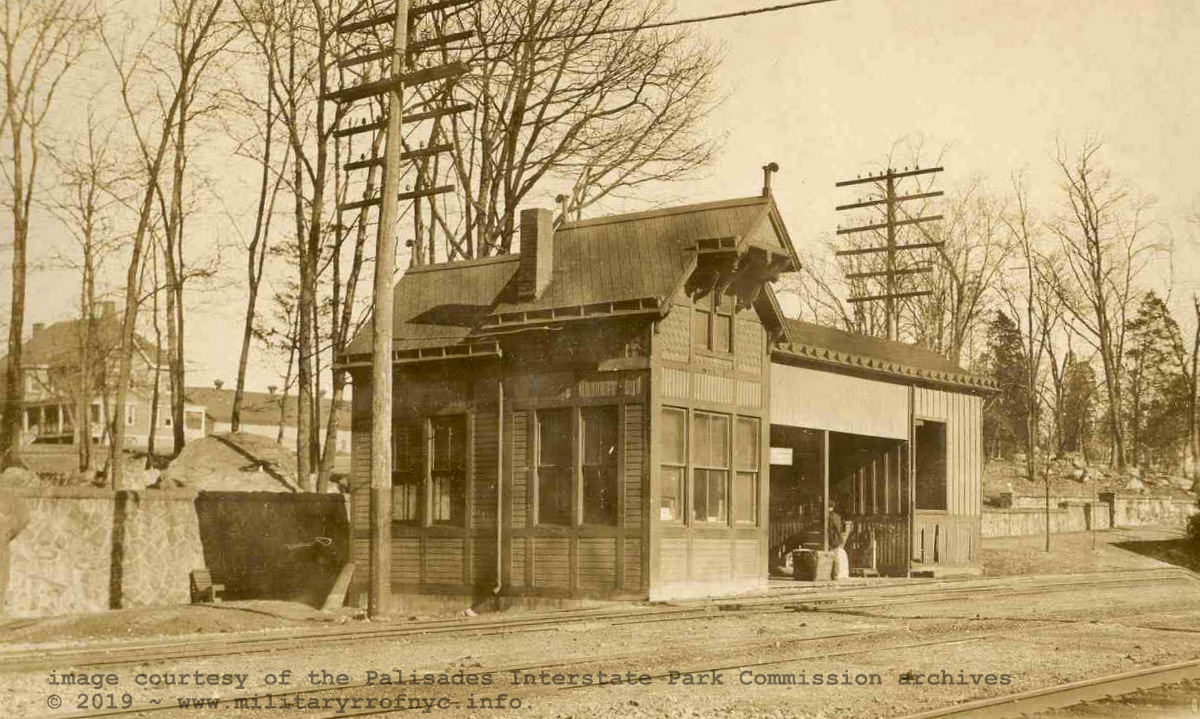 We unfortunately do not have an "official" map yet, but one has been requested of the Navy in a FOIA request, if one still exists. A temporary maps of sorts has been created by the author using the aerial image above.

It appears the naval railway at Iona Island Railway had an interchange with the West Shore Line of the New York Central. Freight service appears to have interchanged with a switch off the West Shore, just out of the image on the bottom of the following photo. Passenger service north of Haverstraw, NY ceased on the West Shore in 1958, so that assists us in dating the aerial imagery.

The following image is that aerial view of Iona Island annotated by the author, and is the best representation of a track layout that we have right now. Iona Island - undated (believed to be post 1960)
We can see what appears to be a small internal combustion type industrial locomotive on the siding next to the main line of the West Shore Railroad as well. Three units have been located in the General Electric builders records, and are in the roster below.
original image: Palisades Interstate Park Commission archives
courtesy of Donald "Doc" Bayne
annotated version: © 2019 ~ www.militaryrrofnyc.info
added 29 April 2019 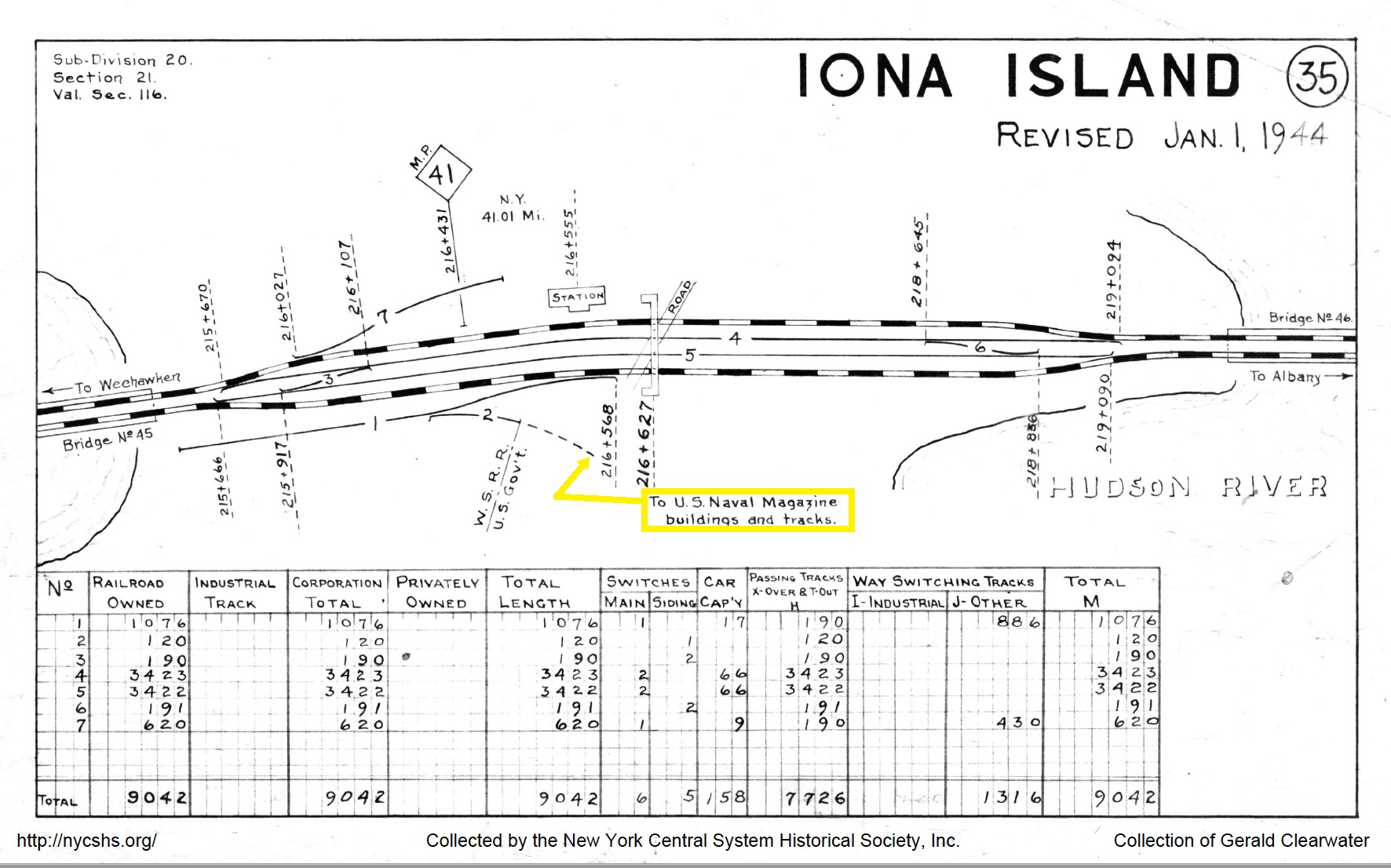 For this railroad, we know there were locomotives in the roster that would be powered by compressed air to eliminate the danger of fire or explosion. Images exist of these locomotives, and both appear to have Porter on the steam chest. This author's copies of H. K. Porter builders records does contain two entries for Iona Island, but unfortunately did not contain a notation for those being compressed air locomotives, despite a classification system at the beginning of the records stating compressed air locomotive shall be marked with a "P" following the wheel arrangement, i.e.: 0-4-0P

However, thanks to the following document located online in Google Books archives, we can confirm the locomotives were in fact compressed air. 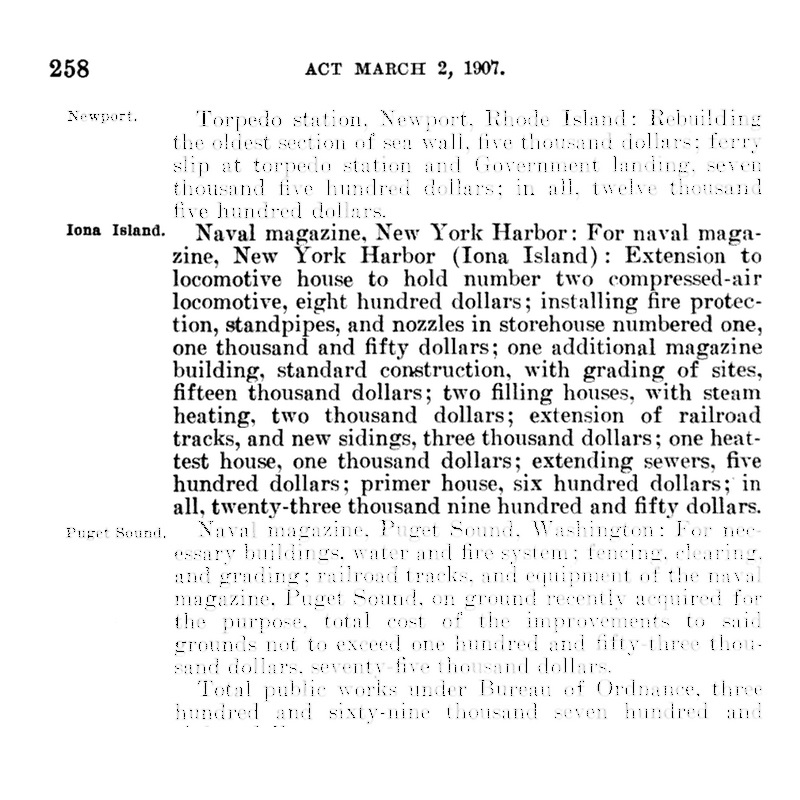 According to "Compressed Air; it's production uses and applications" by Gardner Dexter Hiscox; (1903);

One of the great things about the internet age (and trust me, there are plenty of bad things about it as well) is the access to open resource websites. Without them, I could not have even have begun to attempt to search for information and documents pertaining to the locomotives used at Iona Island. Nor would I have ever expected to find the actual catalog published by H. K. Porter for their line of compressed air locomotives no further than a few strokes of my keyboard.

So, in my quest to provide complete information, I was able to download the catalog and provide you, the reader; with a copy for your reading pleasure. It explains, in layman's terms; how the compressed air locomotives operated and the physical plant required for supplying them with air. In addition to this, it also gives the specifications for the various models on Compressed Air Locomotives offered by H. K. Porter. This second edition was published several years after the Iona Island Locomotives were constructed, but the information remains applicable.

With special thanks to: