The Atlantic Gulf & Pacific Company was a dredging firm hired by the City of New York to dredge and fill the Mill Basin area. This firm is not to be confused with Gulf Refining (Gulf Oil) which had a fuel depot on the north property border of this company.

I have no doubt come to the conclusion that we are dealing with the same firm, as research has led me to learn that the Atlantic, Gulf & Pacific owned several dredges, one of which was built by New York Shipbuilding. This vessel was constructed as a suction dredge. Construction began in October 24, 1905 and was launched March 5, 1906 and was named "George W. Catt" which is the name of the gentleman mentioned in the article above who was president of New York Dredging and was a principal in Atlantic, Gulf & Pacific.

Further research has led me to discover that the Atlantic, Gulf & Pacific made Mill Basin their base of dredge construction and commenced with shipbuilding at this location. The ferryboat "Poughkeepsie "was constructed at this location.

The following synopsis was located in the the book "America's Maritime Progress" by George Weiss, J. W. Leonard, 1920, and published by the New York Marine News Company:

The development of maritime interests in the United States has caused a corresponding expansion in the work of improvement of rivers and harbors, the building of docks and canals, and other undertakings calling for a large quantity of dredging work.

Among the companies in the United States noted for the extent and quality of its operations and the completeness of its equipment for the execution of contracts for hydraulic dredging, the Atlantic, Gulf and Pacific Company has attained a foremost place, and for the past twenty years has been identified with large and important works along the coasts, rivers and harbors of the United States on the Atlantic, Gulf and Pacific Coasts.

The business was established and the company incorporated on February 27, 1899, by J. McMullen, George W. Catt and Herman Krusi. Mr. Catt died in 1905 and Mr. Krusi retired from the business, and the officers now are J. McMullen, president; DeWitt D. Barlow and L. T. Gaylord, vice-presidents, and H. E. Shaver, secretary and treasurer.

The hydraulic dredging equipment of the Atlantic, Gulf and Pacific Company is distributed along the entire Atlantic and Gulf Coasts of the United States. The company operates the largest fleet of hydraulic dredges along the Atlantic Coast, and has a degree of preparation for the execution of work in this line which is unsurpassed.

Besides its work on the Atlantic and the Gulf the company is also an important factor in similar work on the Pacific Coast, where it operates in connection with affiliated companies, the San Francisco Bridge Company, of San Francisco, Cal., and the Puget Sound Bridge and Dredging Company, of Seattle, Wash. Its equipment for its Pacific work is similar to, and proportionately as complete as, that which it utilizes on the Atlantic and Gulf Coasts.

Besides its work in the continental United States, the company also operates in American possessions overseas through its subsidiary company, the Atlantic, Gulf and Pacific Company of Manila, with head office at Manila, Philippine Islands.

In order to keep up the completeness of its equipment and provide for its enlargement from time to time as the growth of the business demands, the company has developed its own repair yard in Brooklyn into a considerable establishment for the construction of barges, lighters and floating drydocks. This plant is located in the company's yard at Mill Basin, Brooklyn, and its equipment is of the most complete and effective character for the turning out of the most modern type of hydraulic dredges and of barges, lighters and other harbor and coastwise equipment.

The very great development of marine interests and the very large number of docks, yards, waterways and channels which call for dredging work in connection with their construction and utilization has led to a continuously increasing development of the operations of this company, which is largely engaged on contracts for various corporations and firms at all coast points in the United States. The company is constantly engaged on large operations of this kind for many and varied purposes connected with shipbuilding and navigation, and has filled a large number of Government contracts for work of this character. From the inception of the business the management of the affairs of the company has been in the hands of men of long and practical experience in connection with engineering, and particularly of hydraulic work, the president, Mr. McMullen, having been at the head of the business from its inception twenty years ago, and the other officers all being men thoroughly versed in all the requirements of their various duties.

The prospective marine development in connection with the deepening of channels, the enlarging of docks and the general increase of demand for all kinds of shipping facilities constitute a group of conditions especially favorable to the growth of an enterprise of this kind.

The prosecution of the business calls for a combination of ample resources, complete and available equipment, superior engineering ability, and able and far-seeing business management. All of these are possessed and made effective by the personnel and policy of this company, which in the volume and scope of its operations holds a front place in its industry.

As for the property at Mill Basin, the Flatbush Improvement Company purchased the marshland and contracted Atlantic, Gulf and Pacific to dredge the waterways and fill in the tidal marshlands with the dredgings. Eventually the finished area which was now 8 feet above high tide; comprised of 332 acres and was suitable for industrial development .Within 10 years; National Lead, Gulf Refining, and other industries operated here. Also fishing was major occupation of the area and local residents living in shacks on the beach made their living selling crabs, oysters, and clams.

Following the financial panic of 1907, Flatbush Improvement suffered financial difficulties and on January 14th, 1909; Atlantic, Gulf and Pacific purchased the land outright. Also around this time they constructed three large drydocks which came to employ at least one thousand workers. Atlantic, Gulf & Pacific also began promoting Jamaica Bay as a "major harbor" but failed to attract any significant amount shipping: 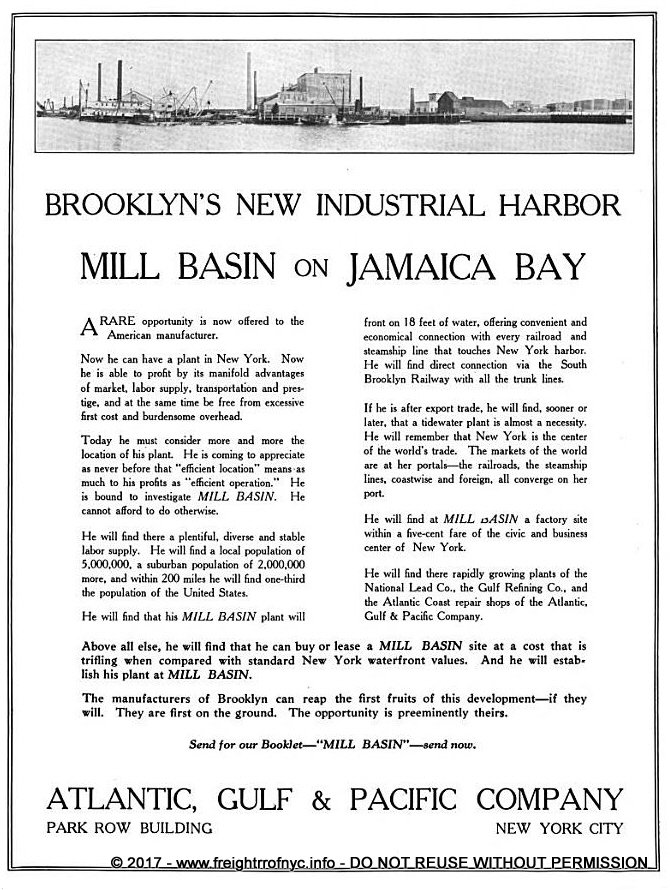 A channel was dredged in 1915 to the main channel of Jamaica Bay, and a bulkhead and wharfage platform were constructed on the mainland side of Mill Creek. By 1919, Mill Island was the site of at least six manufacturing and commercial properties.

During the late 1920's and 1930's the docks were rented to a number of small industrial firms. The neighborhood remained a heavily industrialized area for thirty years, and unfortunately further development was hindered when proposals for rail service to the rest of Brooklyn went unfulfilled. However, the Atlantic Gulf & Pacific Shipyard turned out a marvel of engineering for that time: 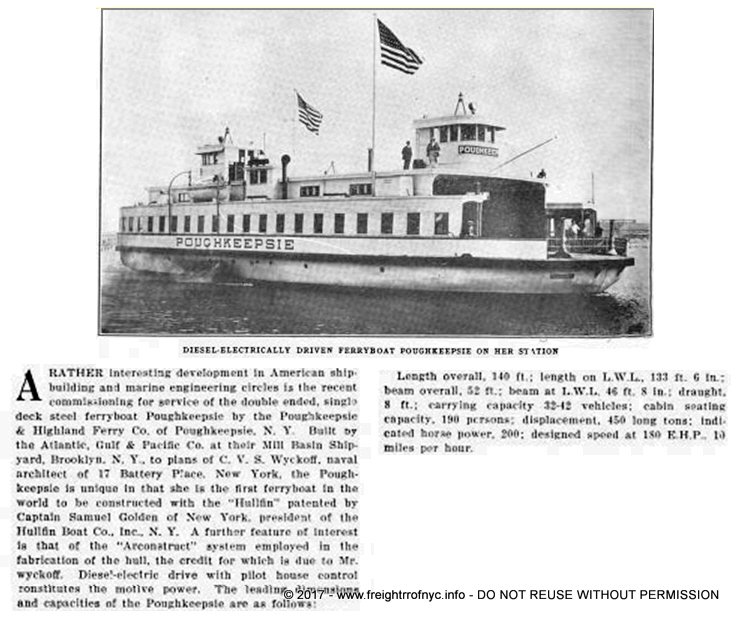 As a quick side bar, the Atlantic Gulf & Pacific was also instrumental in the construction of the Panama Canal, Yazoo Canal in Mississippi, the Houston Ship Channel in Texas and several waterways around Long Beach, NY.

Referencing aerial images on historicaerials.com dated 1954, fail to show any remains of the Atlantic, Gulf & Pacific..

The "inspiration" for this page stems from an email I received from Jim Guthrie on June 21, 2010.

Of particular interest in the 1916 Brooklyn Daily Eagle advertisement in the above chapter, is that it touts:

"direct connection via the South Brooklyn Railway with all the trunk lines."

This is most odd, as there was no known connection or trackage of the South Brooklyn Railway (the freight operation) that went that far east, unless some sort of arrangement was made using the Brooklyn Rapid Transit's freight trolleys that ran along the street car tracks which did extend into Canarsie & Mill Basin. 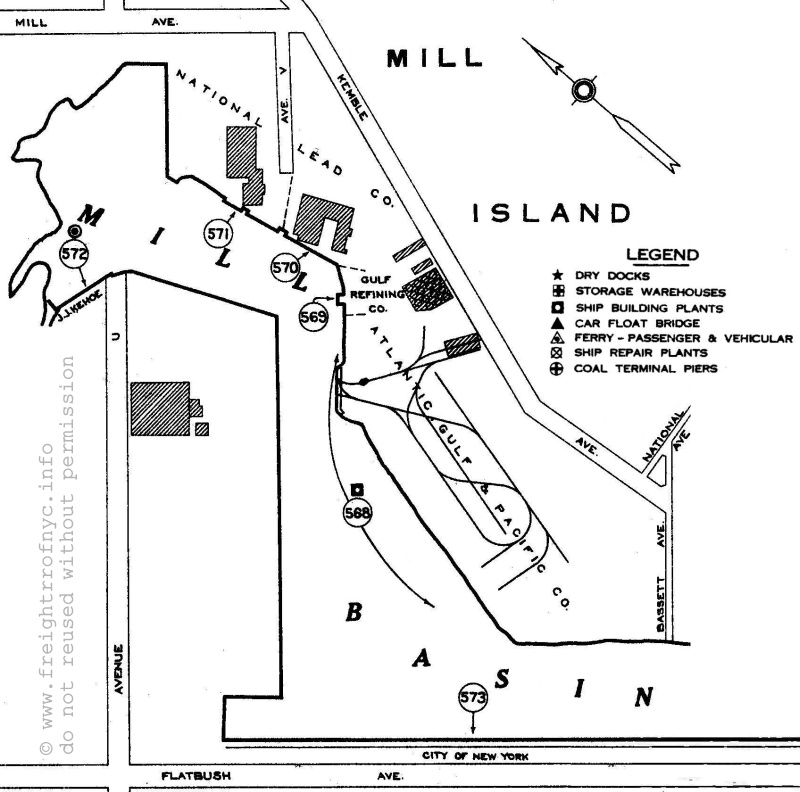 Referencing the locomotive builders records at this authors disposal, only a single entry was located for a locomotive to have been constructed for Atlantic, Gulf & Pacific.

This locomotive was constructed by Baldwin Locomotive Works in September 1903.

While the Atlantic, Gulf & Pacific was not a carfloating operation, it none the less owned several pieces of marine equipment, specifically dredges, dredge tenders and scows.

Normally, this website is not concerned with the non-carfloating aspects of an industrial operation, but since I had located information of some of this equipment, I will list here for convenience.