Michael J. Degnon owned a contracting and construction firm dating from the turn of the century. This firm would be the successful bidders on the Steinway Street Subway Tunnel, among other subway construction contracts. Where the firm was located exactly has not yet been revealed.

In 1903, Colin McLean, merged with Degnon Contracting and the Degnon - McLean Construction Co. was formed. McLean was another significant builder and contractor with significant experience in railroad construction, including the Baltimore & Ohio Railroad Bridge, which was completed in 1889 and spanned the Arthur Kill and linked Staten Island with New Jersey. Perhaps Degnon - McLean's most notable contribution to the New York City infrastructure is the construction of the Brooklyn anchorage of the Williamsburg Bridge.

Of special note: in 1912, employees of Degnon Construction were excavating for the Broadway subway in downtown Manhattan, they unearthed an eight foot diameter brick lined tunnel with a pair of rusty rails inside...  which of course was the Beach Pneumatic Tube!

Also in 1912, plans were announced for linking Flushing and Jamaica Bays with a canal. The Degnon Contracting Company, began dredging Dutch Kills as well as grading, building and paving streets in their one hundred and twenty-five acre site in preparation for factories and warehouses.

During this same time frame and under contract with the New York City, Degnon also began the filling in of marshes and wetlands between Corona and Flushing with ashes. This is similar to the Brooklyn Ash Removal's role in the area and Degnon could very possibly have worked in conjunction with them, however no supporting documentation supports this hypothesis.

According to builders records, Degnon had many locomotives, in several locations. All are listed as narrow gauge locomotives, and apparently were used in a small settings such as construction material hauling. Complicating matters slightly, is that the H. K. Porter builders records reflect entries for:

But strangely, all names are listed for Long Island City. We do know that Degnon (which is the correct spelling) was indeed partners with McLean for several of the subway construction contracts, so it is without any further doubt that "Degnan - McLean" is a misspelling of Degnon - McLean.

However, exhaustive research by this author has failed to produce any reference or records to a "Dengan" Construction. Therefore I am very inclined to believe, based solely on the location listed for Dengan (that being Long Island City), that the locomotives listed under this name are indeed for Degnon.
.

Lapse forward a few years to 1913, and the Degnon Terminal was organized. This was a firm located on the south side of the PRR / LIRR Sunnyside Yards in Long Island City. It was also organized by Michael J. Degnon, who had already owned Degnon Contracting as mentioned above.

The Degnon Terminal was accessed by rail through the "Montauk Cut-Off" tracks of the LIRR. The following are clippings from New York Times advertisements / articles; that was located on the web. From this article we learn that Degnon intended to connect with the PRR and form it's own freight terminal.

Next is an excerpt is from the "Abstracts of Annual Returns of Inchoate & Dormant Companies, Report of the Public Service Commission, First District, 1916": 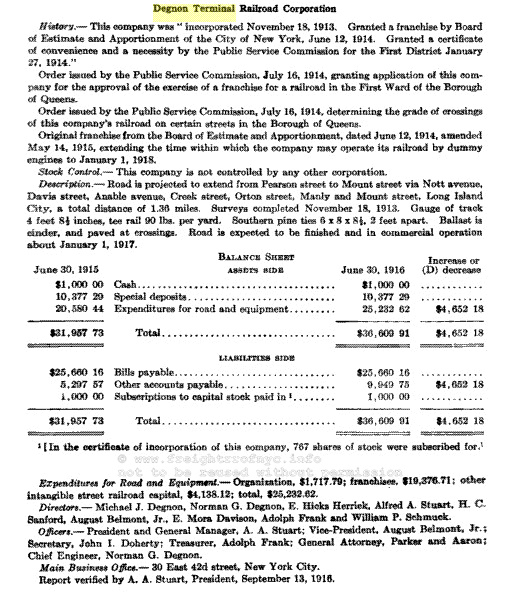 Apparently, two corporations had been organized, one for the construction phase of the property: "Degnon Realty & Terminal Improvement", and the "Degnon Terminal Railroad", once the terminal was completed. In the above document, we see that the Degnon Terminal was granted an extension in which the company may operate it's dummy engines to January 1, 1918, and that the gauge was standard (4' 8 ½").

None of the builders records I have access to and have searched, reflected any standard gauge locomotives listed for Degnon Terminal Railroad, yet upon finding that above report and knowing I had not previously come across any standard gauge Degnon locomotives in my research, caused me to go on a small crusade.

I eventually came across "Colin Churcher's Industrial Locomotives in Canada, Ontario page", and yes, it did reveal a standard gauge Degnon Terminal RR #2 0-6-0 built by Schenectady! (But my files did not show a second owner for this locomotive (that being Degnon). Also, Churcher's page states DTRR #2 was built in 1897, but Schenectady records reflect 7/1899 as a build date. Furthermore, according to the report above, the text states "locomotives" in the plural, so we can surmise that more may be located in the future. To date, all known photographs of switching movements in Degnon Terminal were of a LIRR locomotive.

Another notable fact is that one of the directors of the Degnon Terminal was August Belmont, Jr, who like his father, was involved in the construction and operation of the subways in New York.

.
.
Upon the passage of the Kaufman Act, which in effect eliminated the use of steam locomotives within city limits; those railroads operating with the city confines had to turn to alternate methods of motive power. You can read more about the Kaufman Act on the main page of this website: Kaufman Act.

It appears the Degnon sold this terminal to Long Island Rail Road around this time, perhaps because it was not within Degnon's budget to convert the operation to electric locomotive.

In 2019, John LaBarre was gracious enough to forward the following image of Degnon Construction #5. Upon examination of the image, it appears to be a Vulcan Iron Works locomotive; not an H. K. Porter product. (Porter had the unique trademark of casting their name in the steam cylinder block.) This locomotive does not have that and its had the Vulcan feature of an angled notch between the cylinder and the valve casing. So this locomotive could very well be c/n 1702.

Another interesting item about the image, is it appears the locomotive is derailed. Rear right driver is on the rail but has a big gap between tire and railhead, and the front right is off, high and to the outside. It appears her left side drivers came off the rail, hence that lean. The dump cars to the forward and rear of the locomotive are level. Being 36" gauge, that lean would be accentuated. And that engineer don't look none too happy! 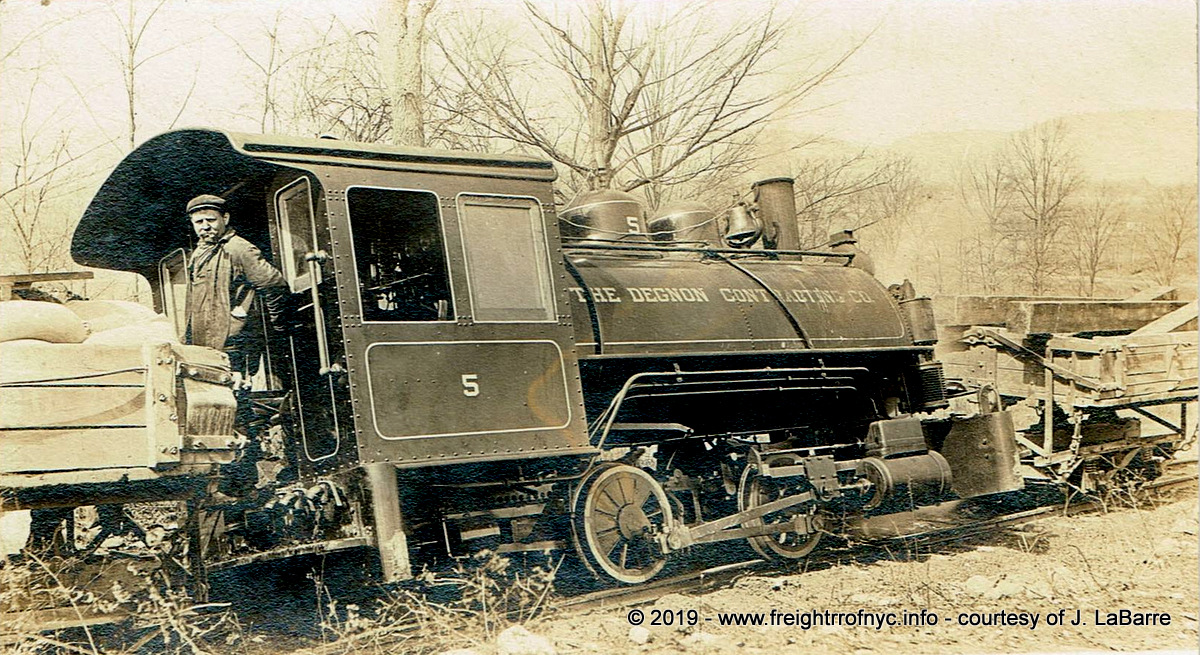 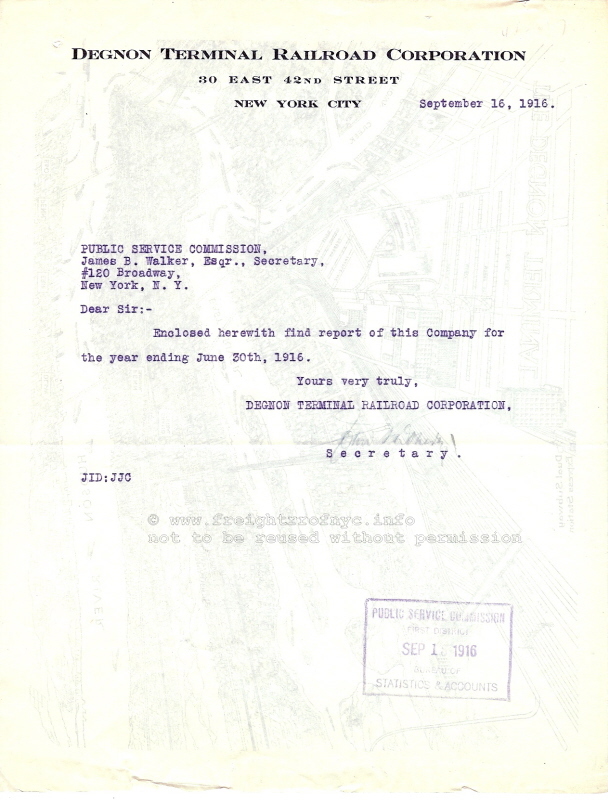 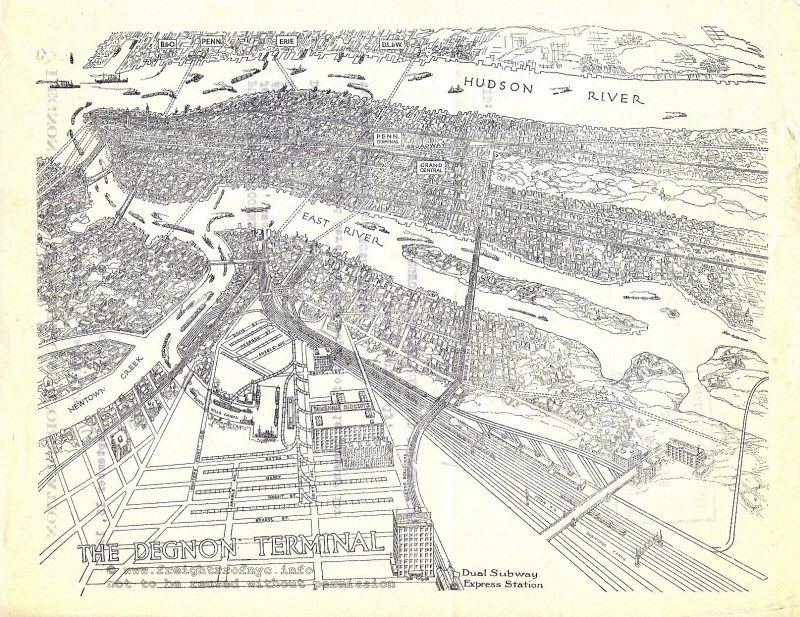