In 1968, his grandson Wayne Huizenga (b. 1937 - d. 2018) as well as business partners Dean Buntrock and Larry Beck founded Waste Management, Inc. The company is now headquartered in the First City Tower in Houston, Texas.

They began aggressively purchasing many of the smaller garbage collection services across the United States. In 1971, Waste Management went "public" on the stock market and by 1972, the company had made 133 acquisitions and posted $82,000,000 in revenue. It listed over 60,000 commercial and industrial accounts as well as 600,000 residential customers throughout 19 states and the provinces of Ontario and Quebec in Canada.

In the 1980s, Waste Management purchased Service Corporation of America, and became the largest waste hauler in the United States.

Currently, Waste Management offers environmental services to nearly 21 million residential, industrial, municipal and commercial customers in the United States, Canada, and Puerto Rico. With 26,000 collection and transfer vehicles, the company has the largest trucking fleet in the waste industry.


Waste Management also is a major contributor to other companies and invests in proven and experimental waste disposal methods, including plasma arc waste disposal, anaerobic waste digesters and methane landfill gas to energy generation. One new field is conversion of municipal solid wastes and sewage sludge into non-hazardous organic salts. The organic salts are then sent to petrochemical refinery where it can be converted into gasoline, diesel or jet fuel.

In the New York City area, Waste Management conducts railway operations in two locations in the New York City area:
..
This company concerns themselves solely with the transloading of solid waste into intermodal style shipping containers placed on flatcars for shipment to out of state landfills or recycling streams at these locations. Loaded trains are shipped to  Atlantic Waste landfill in Waverly, Virginia.

Waste Management published a brochure on their "Waste By Rail" program, and if you so desire you may read it here: 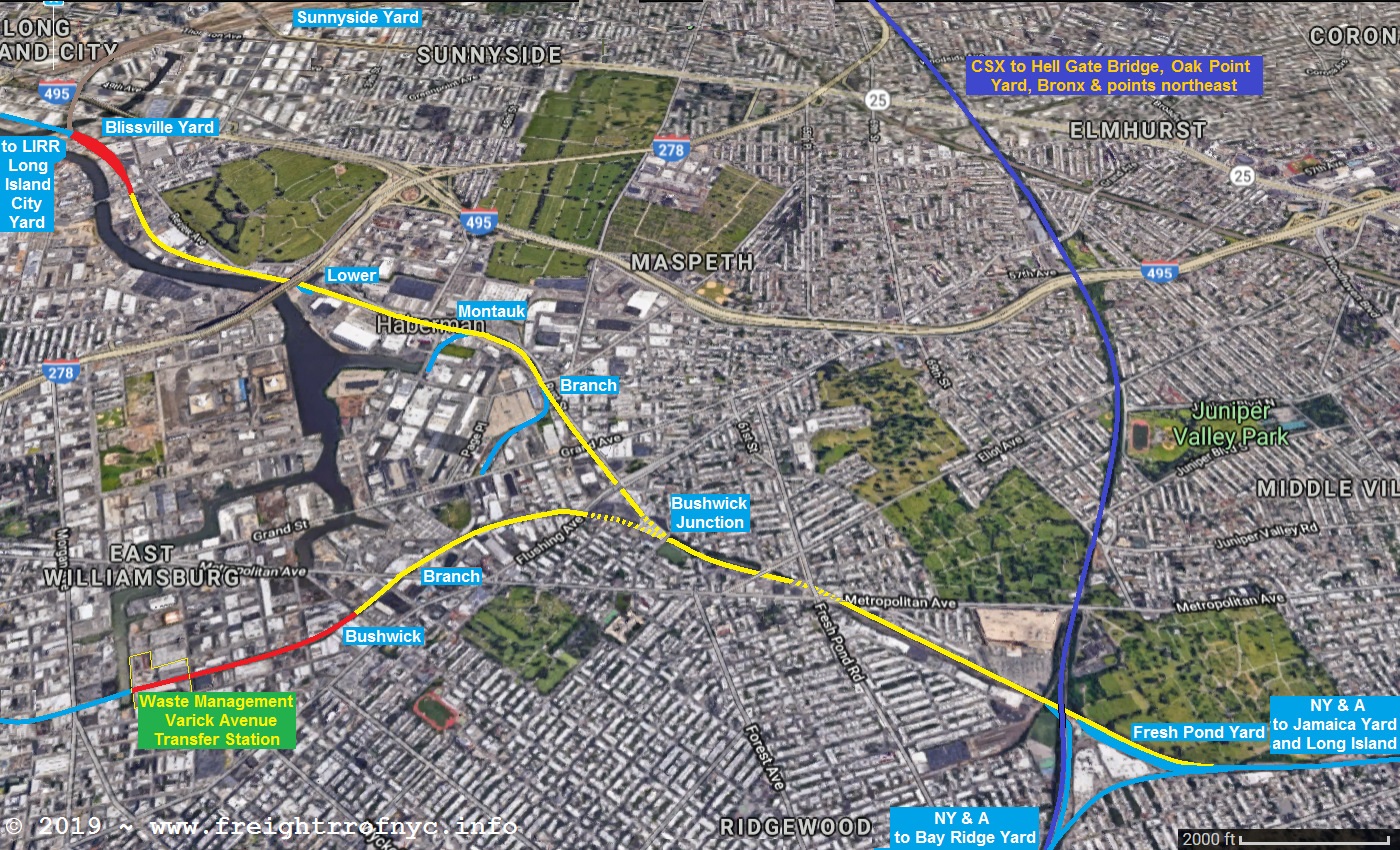 Waste Management Varick Avenue Transfer Station
annotated image © 2019 ~ www.freightrrofnyc.info
added 19 May 2019
.
In the map above,
Freight railroad operations of Long Island Rail Road are leased to the New York & Atlantic Railway. The trackage on which Waste Management is served extending from Varick Avenue to Fresh Pond Yard is the Bushwick Branch of the Long Island Rail Road. One of the interesting aspects of operation over this line is the fact that the railroad still crosses city streets at grade, most of them manually flagged. They are some of the very few remaining grade crossings remaining in the City of New York.

The Varick Avenue Transfer Station of Waste Management is located between Newtown Creek and Varick Avenue, just south of Meserole Street, Brooklyn. Waste Management is not the sole customer along the Bushwick Branch, with several small industries receiving service on stub tracks along this route from New York & Atlantic Railway, mostly lumber & aggregate.  This is a congested industrial & heavy commercial area.

East of Waste Management, a single track crosses the Newtown Creek over a small steel trestle and reaches east 2000 feet to service a concrete plant. This is also known as the Morgan Avenue Yard. This stub is serviced by New York & Atlantic Railway.

Heading west from Waste Management, waste container cars are stored along the sidings of the Bushwick Branch as far east as Metropolitan Avenue. Trackage here is three and four tracks wide. Just west of and before Woodward Avenue, trackage reduces to single track. 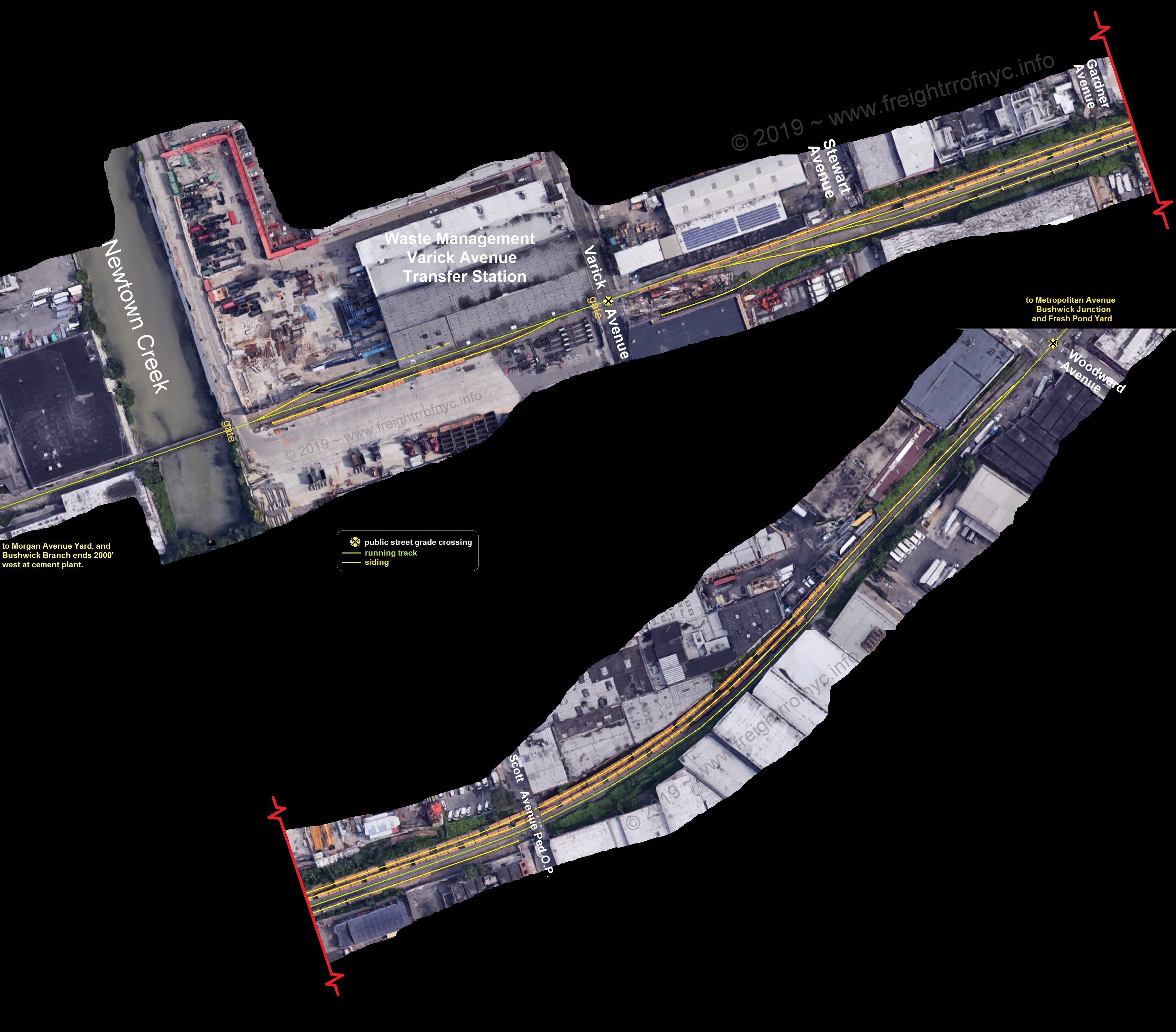 On the east side of Metropolitan Avenue (out of view on the map above) there is a runaround siding that joins the single track until 54th Street, before returning to single track until reaching Bushwick Junction. Here the Lower Montauk Branch runs parallel to the Bushwick Branch until entering Fresh Pond Yard.
.

The Garbage Trains
The typical arrangement used for hauling refuse is four 20' foot containers specially built for the purpose of hauling refuse onto one 89' flatcar. Several flatcars are grouped together forming a cut of cars. The empty containers on flatcars are switched by utilizing a shuttlewagon, also known as a trackmobile. Flatcars with empty containers are brought west over a trailing point turnout, the switch is thrown and the shuttlewagon pushes east onto a stub track for a short move into a building, where the containers are loaded with refuse in an enclosed facility.

After a cut of cars is loaded, they are pulled west out of the building, switching back onto the Bushwick Branch, the turnout thrown and the shuttlewagon and cars reverse direction; proceeding east up the track to one of the sidings. The loaded cut is dropped. The shuttlewagon switches over to an adjacent track where empty cars wait to be brought west to be loaded, and for the procedure to start again. Once several cuts of loaded cars are blocked together, the block of cars is hauled to Fresh Pond Yard using the new Tier 4 mother/slug set USWX #400 & #010.

As Fresh Pond Yard is also the primary receiving yard for New York & Atlantic freight destined to and from Queens, as well as all of Long Island, the yard can get crowded. So standing Waste Management trains are stored in Blissville Yard a couple of miles north on the Lower Montauk Branch.

From here, when completed and loaded trains are ready to roll, those that are at Blissville Yard are picked up and brought back southeast to Fresh Pond Yard, combined with those at Fresh Pond Yard, and interchanged with CSX who brings them north (over former New York Connecting Railroad trackage (joint operation of Pennsylvania and New Haven Railroads) over the Hell Gate Bridge to Oak Point Yard. Here they reverse direction and head south turning west at the Bronx Kill to the Waste Management Harlem River Yard Transfer Station. Here the trains from Varick Avenue Transfer Station are combined with loaded cars from the Harlem River Yard Transfer Station. 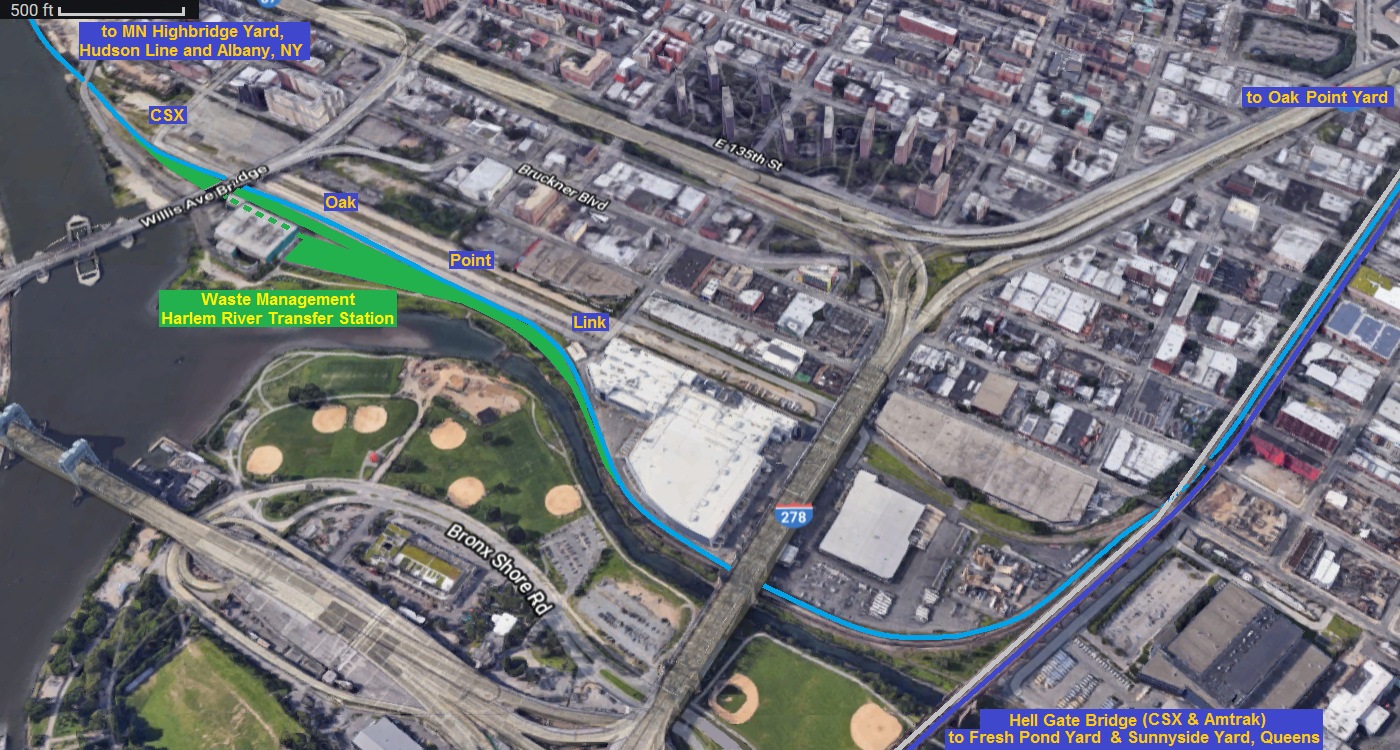 
For the Harlem River Yard Transfer Station, the facility receives and sends it rail traffic via the CSX Oak Point Link via Albany, NY. To the northwest a few miles the Oak Point Link goes around Highbridge Yard of MetroNorth Commuter Railroad. North of the Highbridge Yard, the Oak Point Link merges into to MNCR where CSX shares trackage rights with Metro North and continues to follow the Harlem River, turns north at Spuyten Duyvil to Croton - Harmon Yard, and hence forth to Poughkeepsie and Albany. Freight on this segment mostly travels off peak hours (nights and weekends) with some movements between the morning and evening rush hours. Most of the Waste Management traffic flows this route to get to CSX Selkirk Yard for shipment to points west.

A mile or two to the northeast of the Waste Management Harlem River Yard Transfer Station is CSX Oak Point Yard. General freight for Boston, and other points northeast (Connecticut, Vermont, Massachusetts, Maine, Rhode Island and the eastern provinces of Canada is blocked and sorted here for the trip along the north shore of Long Island Sound. Cars to and from the Waste Management Varick Avenue Transfer Station also are here. Empty & loaded Waste Management cars are also here: empties to go over the Hell Gate Bridge to the New York & Atlantic interchange at Fresh Pond Yard, and loaded cars to be joined with cars here at Harlem River Yard Transfer Station for the trip north.
..
Historical Connection to New York New Haven & Hartford
On a historical note, this facility resides on the former location of the New York, New Haven & Hartford Railroad "Harlem River Yard". There were at least two float bridges at this location, just to the east of the Willis Avenue Bridge approach. When the Willis Avenue Bridge was first constructed, it required the reorientation of the yard tracks.

With the construction and opening of the modern NYNH&H Railroad's Oak Point Yard and the associated electrically operated transfer bridges, the Harlem River Yard would see a downturn in traffic. Its purpose would be relegated pretty much to carfloat traffic serving the offline terminals located on the Harlem River (Delaware Lackawanna & Western "Harlem Transfer"; Central Railroad of New Jersey; Lehigh Valley; Erie; and the New York Central at Bronx Terminal Market). This was so that NYNH&H marine equipment could avoid navigating Hell Gate (which was treacherous to say the least) and around Randall's Island multiple times a day.

Following the bankruptcy of Penn Central Railroad, most of the Harlem River Yard not already removed was torn up. Upon Waste Management taking up residence and redevelopment of the area, the yard tracks to service Waste Management were built parallel to the Oak Point Link through track, much as they had been prior to 1900 and the construction of the Willis Avenue Bridge!
..

There are many locomotives wearing Waste Management livery seen throughout the United States, as they have multiple facilities. Only a few have been confirmed to have actually operated in New York. Only those believed to have worked at either the Varick Avenue or Harlem River locations will be listed here.

It appears that Waste Management leases their locomotives from companies that specialize in railroad equipment leasing. Those being: Johnson Railway Services, WATCO, and Shuttlewagon. Also if needs dictate, New York & Atlantic Railway will switch out cars using locomotives on their roster.

.  ..
.
Special Thanks To:
..
Gregory Grice
for use of his imagesJohn McCluskey
for his images and roster