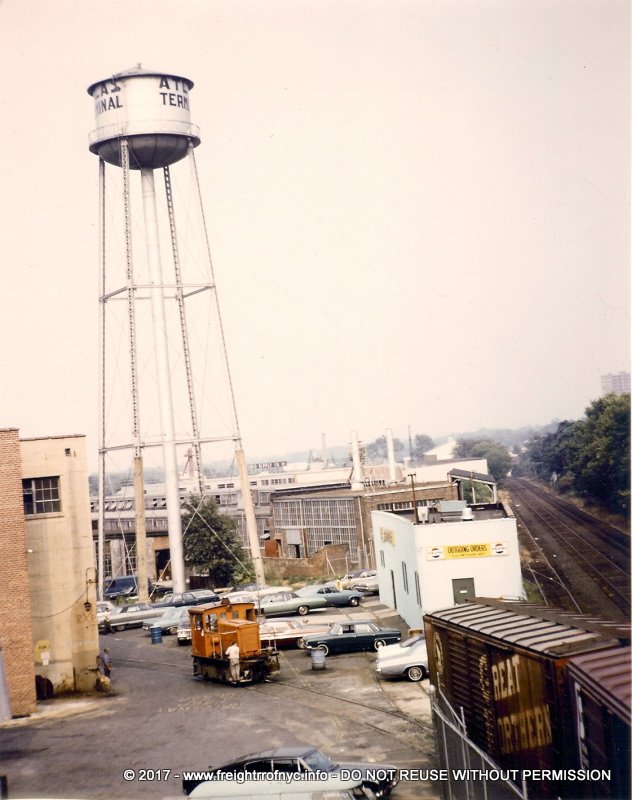 Atlas Terminal was a small industrial park located at Cooper Avenue and 80th Street, in Glendale, Queens. It started out around 1904, and possibly earlier; as an industrial area.

Around 1922, one of the original tenants: Henry Hemmerdinger; began purchasing the surrounding properties adjoining his own and eventually the property would come to be expanded to over 16 buildings. Eventually, it would be conglomerated and organized into a rather modest industrial park.

I cannot recall where I located the following blueprint, but it defines the simple track structure in the earlier days of the Atlas Terminal. 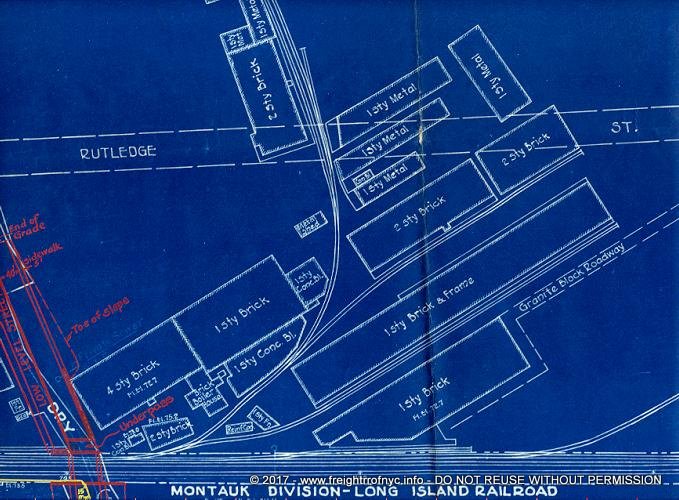 (please contact the author, if this image belongs to you, so I can give you credit.)
.

The following image, is an E. Belcher Hyde property map from 1929. In this map, the occupants of the various structures are noted. We also see, that the proposed through streets (Rutledge Avenue, 81st Street, 82nd Street, 83rd Street) were drawn in. These through streets would not be constructed and remain unbuilt to this day. 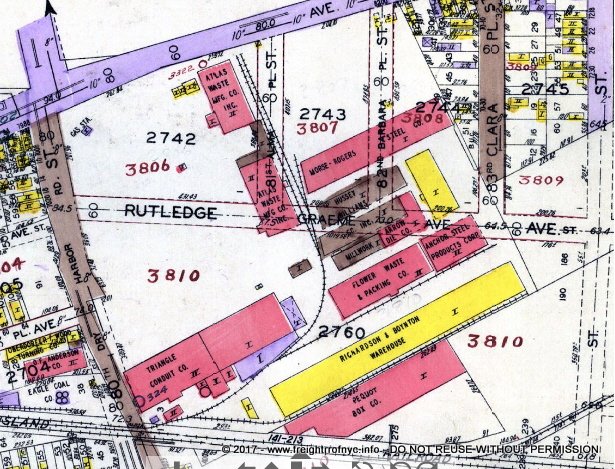 This structure is seen in the above Belcher Hyde Property Map. It appears that by 1940, a rail siding was installed north of the LIRR Montauk tracks to serve the south face of the building, as evidenced by the two boxcars seen  below the Atlas Terminal water tower. 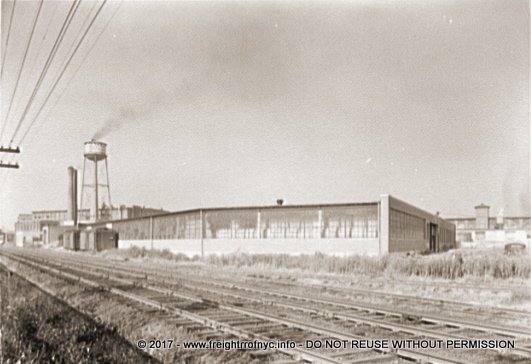 By the 1950's, Atlas Terminal would be one of the premiere industrial parks in New York City (oft used as a prototype) encompassing 45 buildings spread out over 25 acres. Over 75 percent of the structures are of one story height, most of them brick construction. A few of the tenants throughout the years were: Kraft, General Electric, Westinghouse and New York Telephone.

Accurate track plans of the Atlas Terminal property could not be located. The following aerial image with track overlay is circa 1954.

The Long Island Rail Road would place inbound freight cars on the lead track, and the Atlas Terminal crew would distribute those cars accordingly throughout the terminal.

At its peak, Atlas Terminal would switch over 60 carloads per day to the various tenants in the terminal, and would have rail access / interchange via the Montauk Division of the Long Island Rail Road.

According to a schematic track map from the the Art Huneke archive and seen on the Steve Lynch's LIRR website, the building in the center of the property was an enginehouse, with indoor storage for the locomotive. This structure and indoor track (represented by the segmented line) is noted in the aerial photo above.

Railroad freight service at this facility concluded in 1982.

What was not demolished of the Atlas Terminal, was converted to the esthetically fitting "Atlas Park Mall", with industrial style buildings, (arched windows, external "I" beams, and the original painted brick wall advertisements).

Atlas Terminals, as we presently know of; had at least two locomotives over it's history, neither of which were steam. But, both were extremely small and industrial in nature, so I added this chapter to the website. The first locomotive (the older of the two known) was of Plymouth manufacture, and the other is from General Electric.

On 19 June 2009, Ted Zach of Atlas Terminal Advisory Services, courteously contacted me with the current location of the GE locomotive:

"The GE locomotive is currently stored near the rear of Atlas Terminals Building #38. It can be seen from the parking lot entered from 88th Street."

Both locomotives were equipped with extra long draft gear to facilitate car movements on the sharp radius trackage within the Atlas Terminal. The four tall vertical rods around the shank, were apparently spring loaded and some sort of automatic centering device for the coupler.

In June 2013, I received an email from Mr. Damon Hemmerdinger of Atlas Terminals:


Hi Philip –
I love your page. I am the owner of Atlas Terminals, and we would like to sell the locomotive to a collector. Do you know how I might go about this?


I informed him of his options and routes to take to, and that is where matters rested. That is, until I receive an email from Ernie Darrow of Shore Line Trolley Museum on 26 February 2014:


Philip,
The Atlas Terminal GE 23 tonner is now at the Shore Line Trolley Museum in East Haven, CT.
Thanks go to ATCO the Hemmerdinger family for preserving the locomotive and donating it to the museum and to the NY Transit Museum for making the initial referral.
Pics attached from January 2014 of the locomotive at the Shore Line Trolley Museum.
The museum plans to have it operational during 2014
Ernie Darrow

So, I would like to thank Mr. Hemmerdinger as well for preserving the locomotive, and the Shore Line Trolley Museum for adopting the locomotive. It appears I have to plan on a trip to Connecticut in the near future!