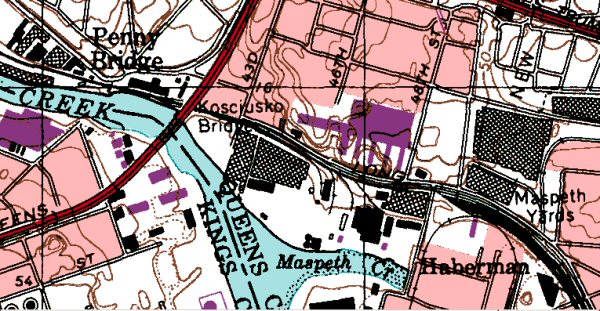 Phelps - Dodge Copper Smelting & Refining began operations at their Laurel Hill location in 1920, but their occupancy of the property predates this with a chemical plant at this location.

The Laurel Hill copper refinery was built in 1905 by the Nichols Refining Company for electrolytic refining of 'blister' copper. Most of the copper was done for Phelps-Dodge Company, and came from it's smelters in Arizona. In 1928, Nichols built another refinery near El Paso, Texas. In 1930 Phelps-Dodge acquired both refineries. After P-D acquisition, the Laurel Hill refinery processed scrap copper from the eastern US, and blister copper from the southwest, and possibly some from South America. 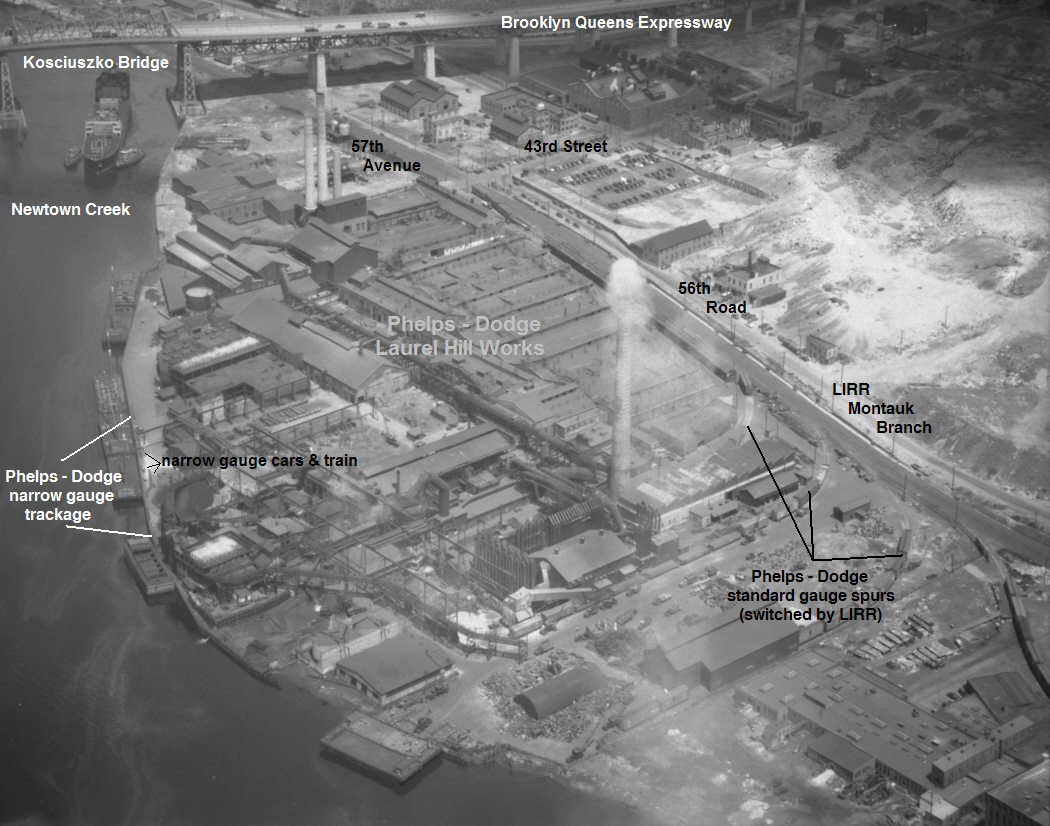 The end products at Laurel Hill would have included copper cathodes (sheets), and copper 'wirebar' (a 265-pound bar that would be melted and drawn into wire).

Ben Schaeffer has contributed information that is particular of interest. At some point in the late 1970's, Phelps - Dodge would become a customer of the Brooklyn Eastern District Terminal. Following the demise of Baltimore & Ohio Railroad, several pieces of their floating equipment were acquired by New York Dock, and by nature of the 1979 merger with same, were stored at and / or used by Brooklyn Eastern District Terminal.

Two scows, numbered 345 and 350; were acquired from Baltimore & Ohio along with numerous platform / station carfloats, the floating machine shop "James H. Clark" and the tugboat "Roy B. White".

As it would turn out, these scows would be used by the Brooklyn Eastern District Terminal in the transport of copper anodes to the Phelps - Dodge Refining Corporation located on Newtown Creek. The copper was used for for the making of copper sulfate based pesticides.

For unknown reasons there was a long involved, labor intensive process for the transfer of these copper anodes arriving via the Brooklyn Eastern District Terminal to Phelps - Dodge:
.

Fortunately, this operation did not occur every day, (and I certainly hope not considering the labor involved!)

And exactly why this laborious procedure was needed is unclear. I can only postulate that perhaps there was a overhead carne on the bulkhead at Phelps - Dodge which was used to remove the stacks of ingots from the deck of the scow in bulk, but if the ingots were loaded inside boxcars, they could not be accessed by the overhead crane and hence the transfer onto an open scow. Or perhaps demurrage (storage fees charged by the railroads) on the boxcars was more than the labor costs involved in transfer the anodes to an open scow which could then be tied up the Phelps - Dodge bulkhead and left to be unloaded at their convenience. Who knows.. And if you do, send an email to bedt14@aol.com for inclusion here.

We have photographic confirmation of this operation, or at least this service to Phelps - Dodge. Ben Shaeffer has generously provided two photographs showing the ingots on B&O scow #345 at BEDT: 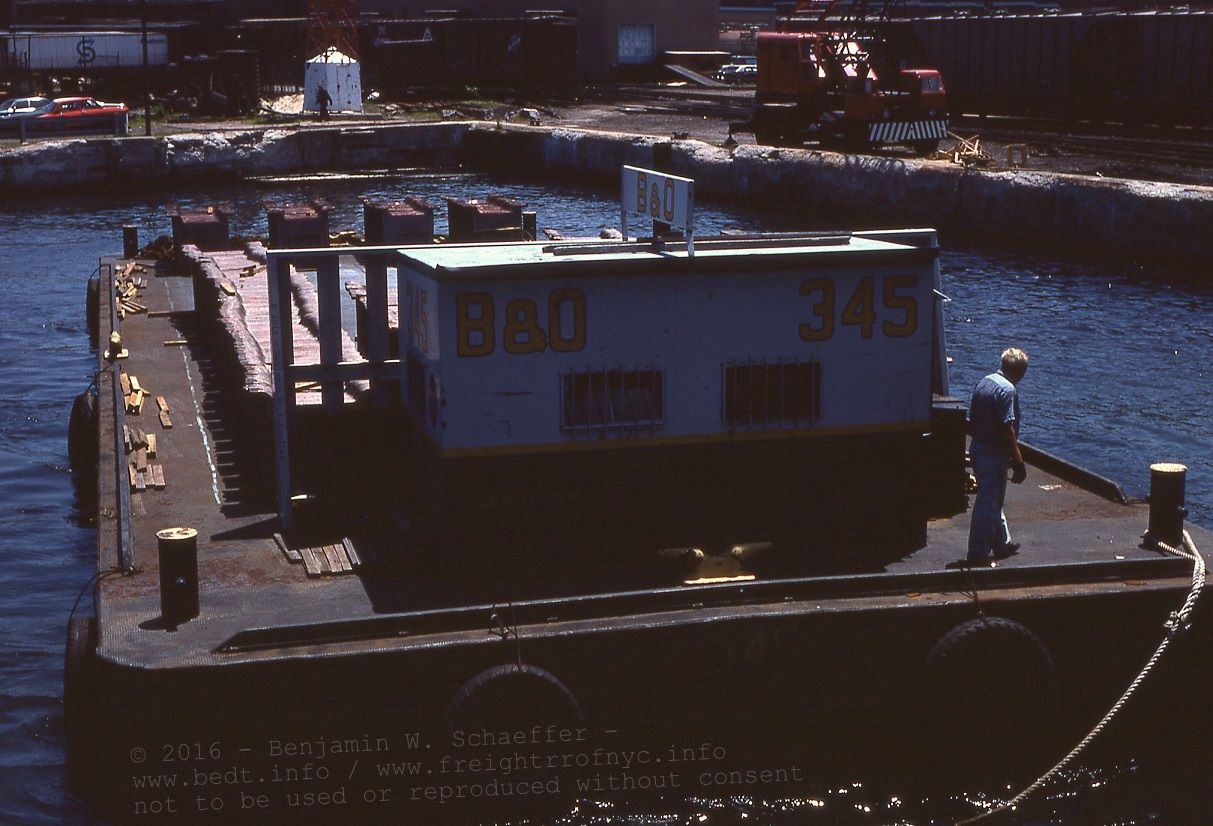 July 12, 1978 - East River at north side of North 9th Street Pier looking east.
(Note navigation beacon base in background).
It is unknown if the BEDT road crane was used for this process.
Benjamin W. Schaeffer photo
not to be used or reproduced without consent
added 29 October 2016 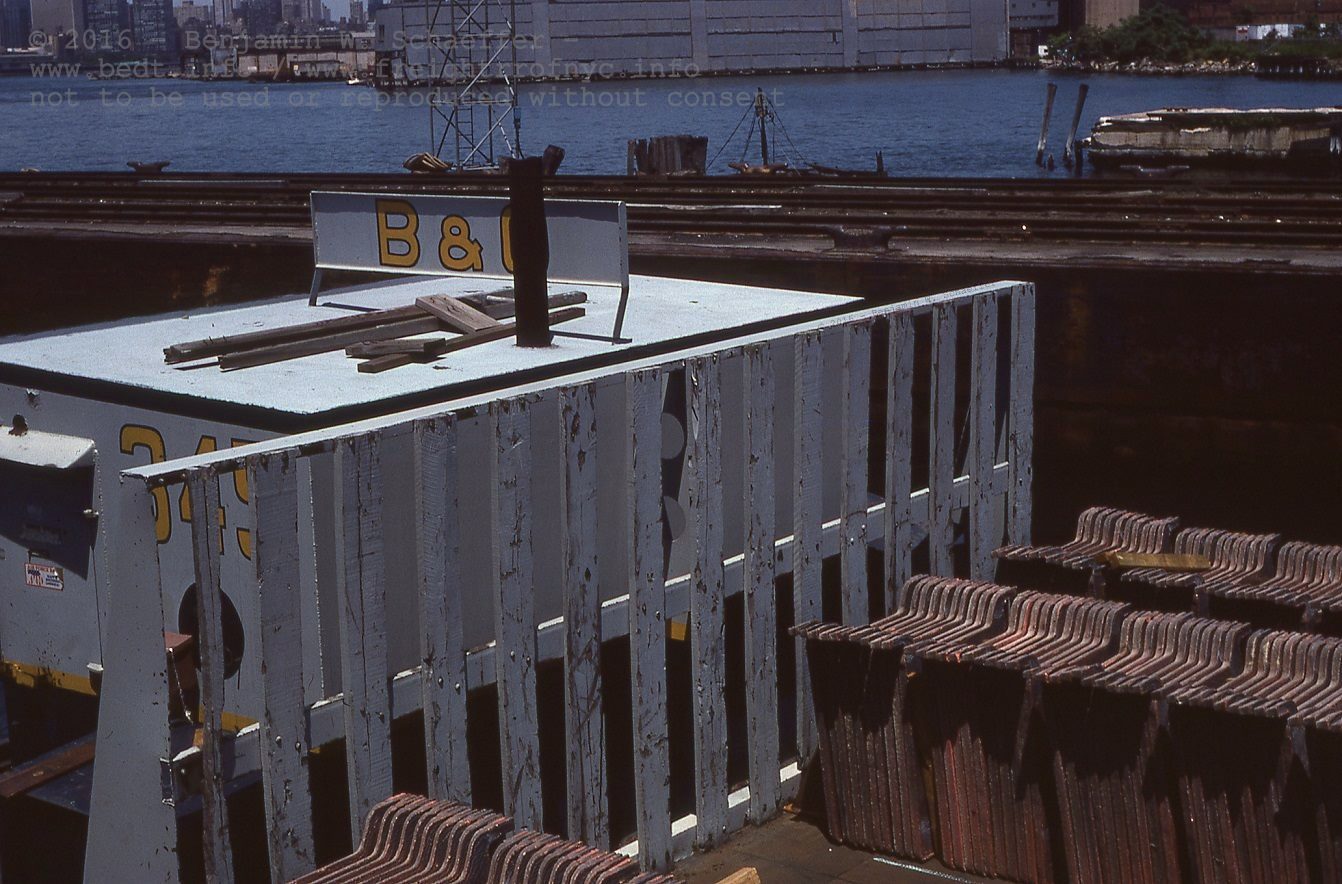 July 12, 1978 - East River at north side of North 9th Street Pier looking north.
Note navigation beacon base in background.
It is unknown if the BEDT road crane was used for this process.
Benjamin W. Schaeffer photo
not to be used or reproduced without consent
added 29 October 2016 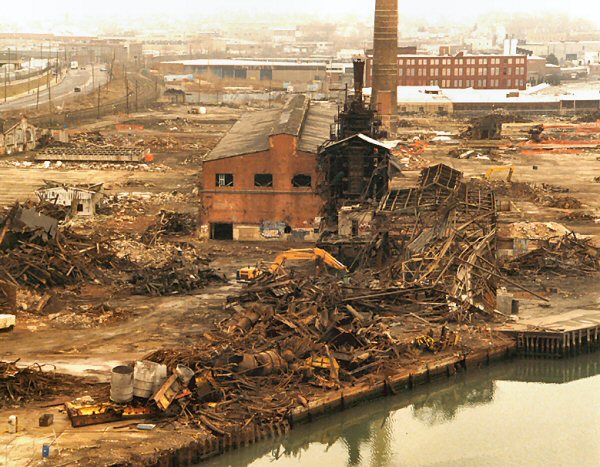 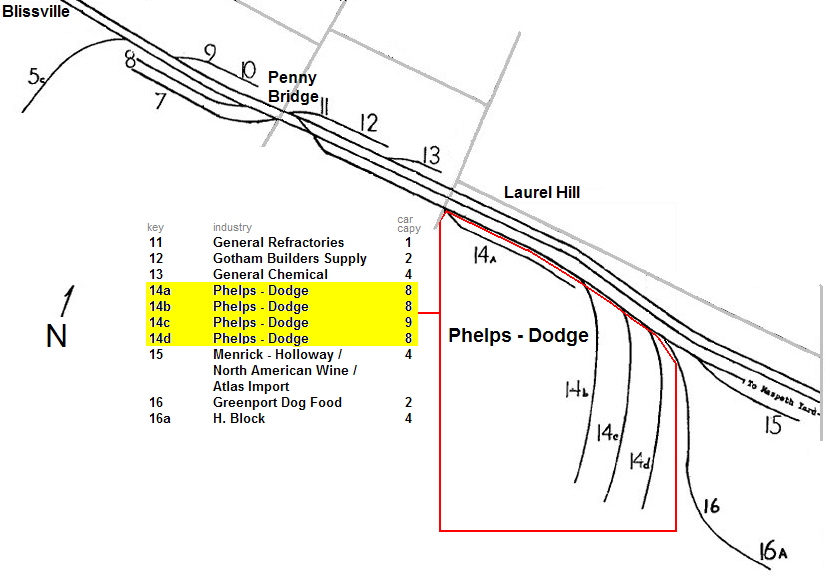 Freight cars destined for Phelps-Dodge were stored in Bliss yard, where the afternoon "Bliss Job" would bring new cars in from Yard A and make up the afternoon train, following the drill order, for the Laurel Hill job.

Bliss Yard was used by LIRR freight and had an engine terminal so that steam engines did not have to run reverse all the way to Morris Park. This was also gone by 1957. In my time, Bliss yard was used to store cars for Phelps Dodge, Van Inderstine and other customers between Greenpoint Ave and PD. Also cars for Murers sidings were stored here. Crews reported at Yard A and brought cars to Bliss before making up their trains for their respectful switching areas.

The afternoon Bliss job made up the train for the crew that switched Phelps Dodge..."

Laurel Hill job went to work at Yard A and usually went right to Laurel Hill siding to gather all westbounds ordered out from Phelps Dodge and several other sidings in the area.   These westbounds were taken to Yard A and the crew would return to Bliss, put the engine in the west end of it’s train in the yard. The conductor rode on the rear (lead) car, using a back-up hose so that he had control of the air brake.

The move was made with hand signals. In the dark these were made using an electric lantern.

When all was ready, the crew shoved the train the mile to Laurel Hill switch and the first customer was Phelps - Dodge.

Phelps - Dodge had four tracks, all on a downgrade toward Newtown Creek and great care had to be taken that these heavy copper cars did not run away while shoving into the property. The usual drill called for about fifteen to twenty cars in and the same number out every night.

However, servicing the plant itself was extensive narrow gauge trackage of 21 inch gauge. Photos of the remaining trackage can be seen here:

"A photo taken in the 1950 or 60's shows standard gauge 40' boxcars with cast copper anodes being unloaded, and the anodes being placed on narrow gauge 8 wheel flatcars, with approximately 30 anodes on the narrow gauge rack type car.

Since each anode weighs approximately 600 to 750 pounds, it is obvious a powered locomotive was needed.

It is also recorded that rubber tired tractors to move the in-plant cars at well.

The Phelps - Dodge refinery near El Paso had 30"gauge. By the 1960's plants were being built without the trams, using overhead cranes, trucks and large forklifts to do the job."

All known locomotives operating on the actual trackage within Phelps Dodge property, (not including the standard gauge Long Island Rail Road serviced sidings); were of 21 inch gauge.

According to Jay Reed's "Critters, Dinky's & Centercabs", the Plymouth RGT model was equipped with a Hercules GO-226 engine, and a total of 5 unit were built during the time frame of 1957 to 1960. The RGT model was built with welded frames (and are almost identical to the RDT model which had a different engine). They were equipped with hydraulically operated transmissions.

According to the Plymouth builders records, three of these Plymouth RGT's went to the Phelps - Dodge refinery in Laurel Hill, Queens, NY.

The following image is of a Plymouth RGT / 4 (4 ton) which would be very similar in appearance to the 5 and 6½ Ton models used at Phelps - Dodge.

The 30" gauge locomotive entry is believed to have been purchased by Phelps Dodge corporate offices in NY, but not actually used in the Laurel Hill Works. It is listed for convenience..