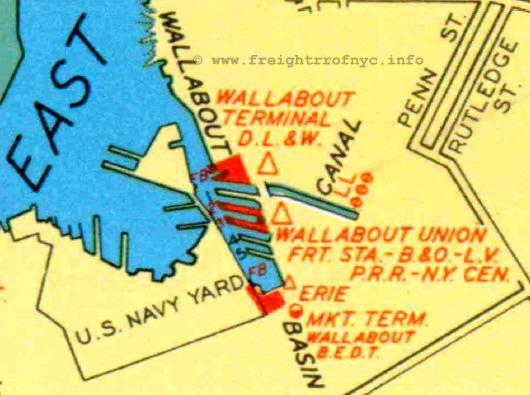 In viewing the Terminal Facilities Map of 1940 below, we can see the various locations of the terminals and facilities located in the Wallabout Basin in relationship to one another.

Starting from the north and working south, this area in the Wallabout Basin would eventually come to be served by several railroads throughout the years:

This particular page is concerned with the history of the two "pier station only" facilities: the "Wallabout Union Freight Station", (combined Pennsylvania, New York Central, Lehigh Valley, Baltimore & Ohio and Central Railroad of New  Jersey); and the "Wallabout Station" of  the Erie Railroad.

The Wallabout Market, where the vendors would actually conduct business, would be organized at this location in 1884, after being banned from its prior location at Fulton Street, Brooklyn.

The Wallabout Market was one of the premier farmer's markets in the city of Brooklyn, and according to historical accounts it was the second largest produce / farmers market in the United States. According to a 1914 article in the New York Times discussing the modernization and expansion of the Wallabout Terminal Market, there were 45,325 farmers wagons located at the market in 1913.

The peak time of business transactions for the Wallabout Market vendors would be between midnight and dawn. Considering there were no to extremely few electric lights during this era, makes this a most unusual time of day to conduct business. But if one thinks about it; conducting business during the wee hours of morning ensured fresh produce delivered and ready for sale by the time the populace was beginning to stir and beginning their day.

Initial research of this facility by this author failed to provide an exact start of operations date for the railroad portion of this facility, and the exact dates of construction and completion of the pier stations was elusive.

Eventually, it was ascertained from the following New York Times article that the Pennsylvania Railroad would establish their presence in the Wallabout Basin at the time of this articles publication on November 1, 1898. 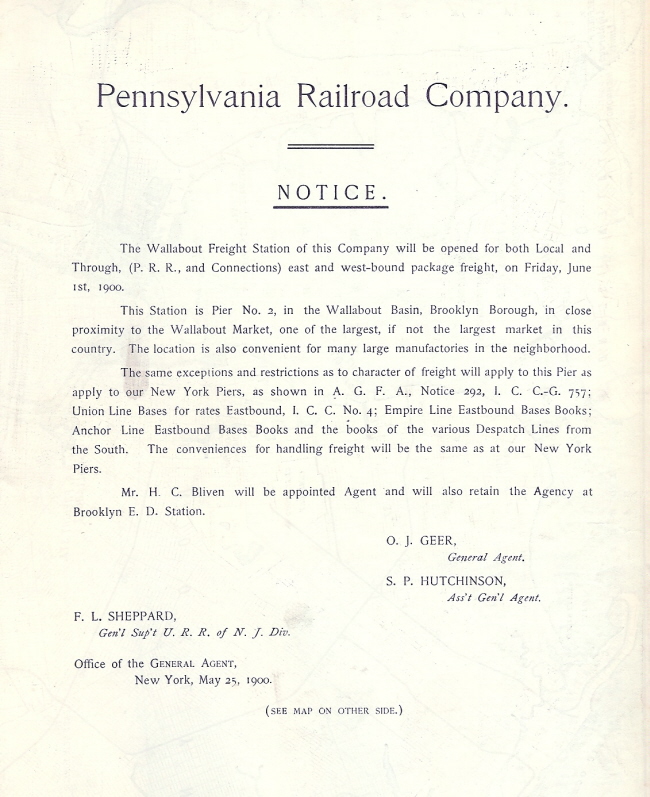 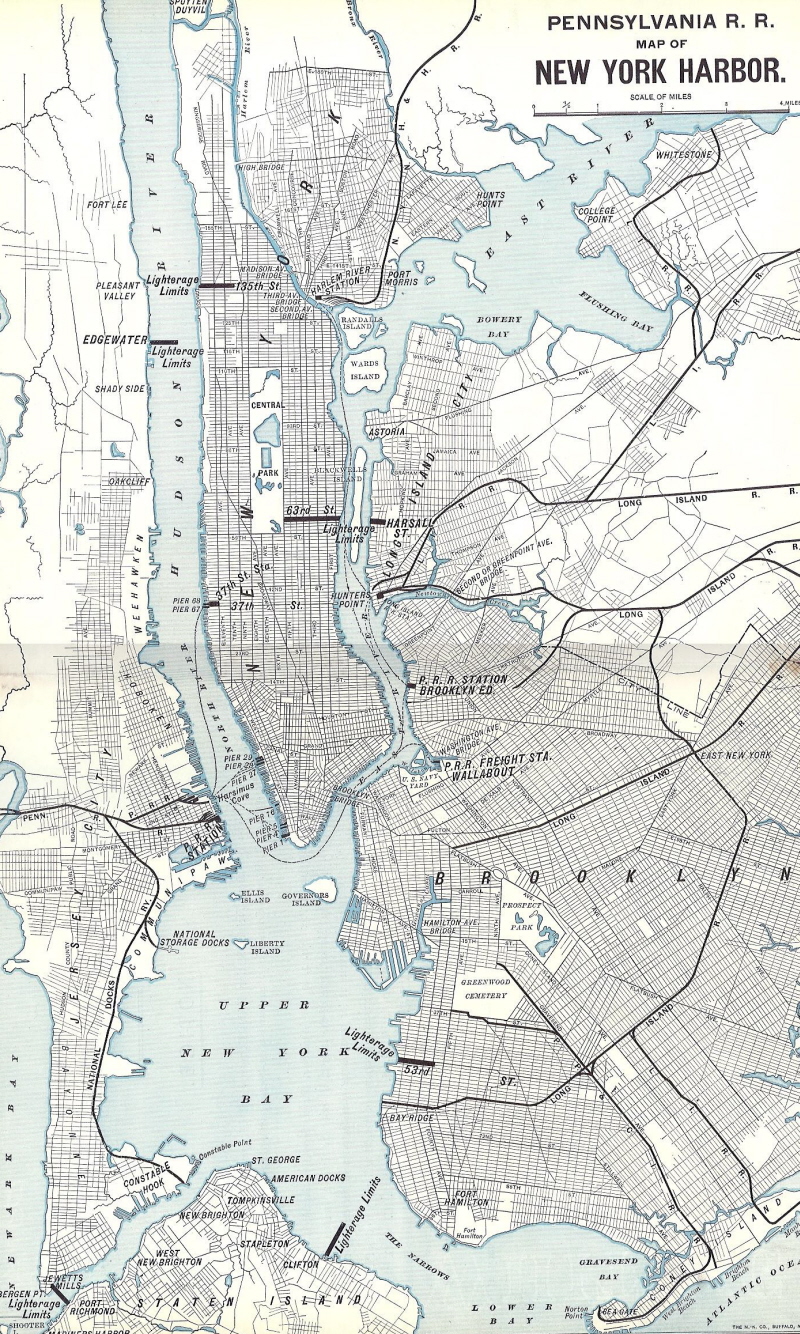 The actual "Union Freight Terminal" or the combined operations of the Pennsylvania, New York Central, Lehigh Valley, Baltimore & Ohio and Central of New Jersey Railroad's is estimated to have been completed between 1906 - 1910, based on the information carried in the following New York Times article:

The following map is an excerpt of the US Army Corps of Engineers Port Facilities Map of 1924 for the Williamsburg / Navy Yard Area.. 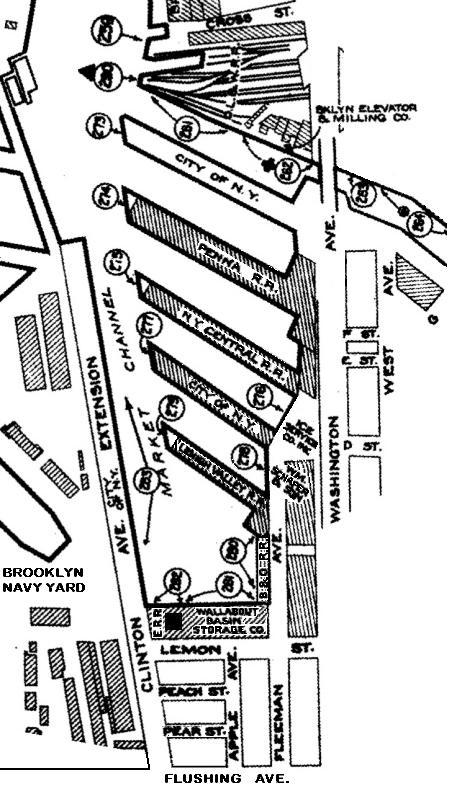 The "Report of the Committee on Terminals and Transportation of the New York State Food Investigating Commission" published April 18, 1913; lists the capacities of the various railroads at the Wallabout Union Terminal in 1913, as follows:

It is understood that the inbound freight was not so much general freight as it was predominately fresh foods, fish, produce and other perishable items which required expedited delivery.

According to a New York Times article discussing the future and expansion of the Wallabout Terminal Market, there were 45,325 farmers wagons located at the market in 1913.

In the picture below, located by Joe Roborecky and the inspiration for this page; was taken in 1932. I have highlighted three of the piers (Piers 2, 3 and 4) of the Wallabout Union Freight Station (upper left corner) as used by the four railroads. Heading west across Washington Street (the main north - south thoroughfare in the image) and in the open field type area is the actual Wallabout Market. 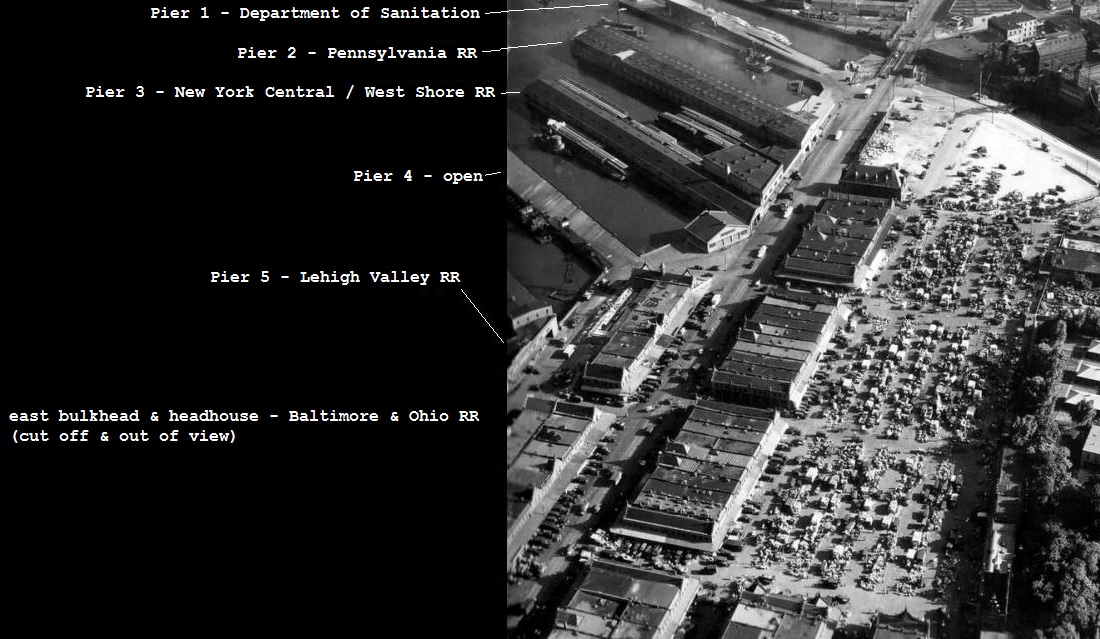 The following image, which is undated at this time; is courtesy of Joseph DeMay. Mr. DeMay has been sending quite a few images "my way" to identify the location. Almost all are piers along the Hudson River. This one however, is a little closer to "home" (from a former Brooklynite's perspective).

Honestly, it took me all of 10 seconds to identify the location with so many "tells" in the image: The Dutch style roofs and gables on the structure on the left, and the smokestacks (of the Brooklyn Rapid Transit / Brooklyn Manhattan Transit Power Plant at Division Avenue) in the image mark this location undoubtably as Wallabout Market. The actual open air marketplace is a tiny block to the left (which is Washington Avenue).

The thoroughfare in the image however is Fleeman Avenue, which at Pier 5 (the pier occupied by the Lehigh Valley RR) jogged diagonally to the northeast and merged with Washington Avenue. The Dutch style structure on the left edge of the image is the building on the south bulkhead of Wallabout Canal of which houses Wallabout Basin Storage and the Erie Railroad Freight House. Metz Street is behind the photographer. 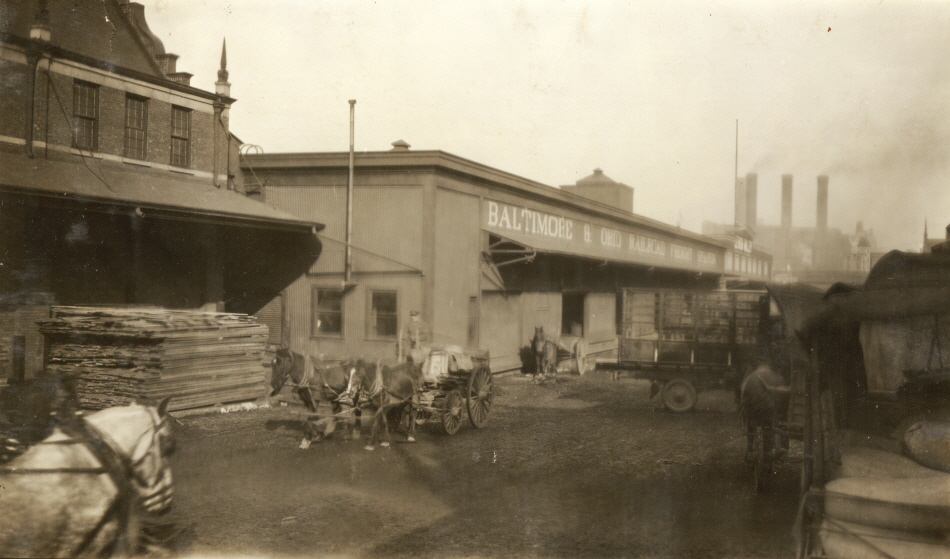 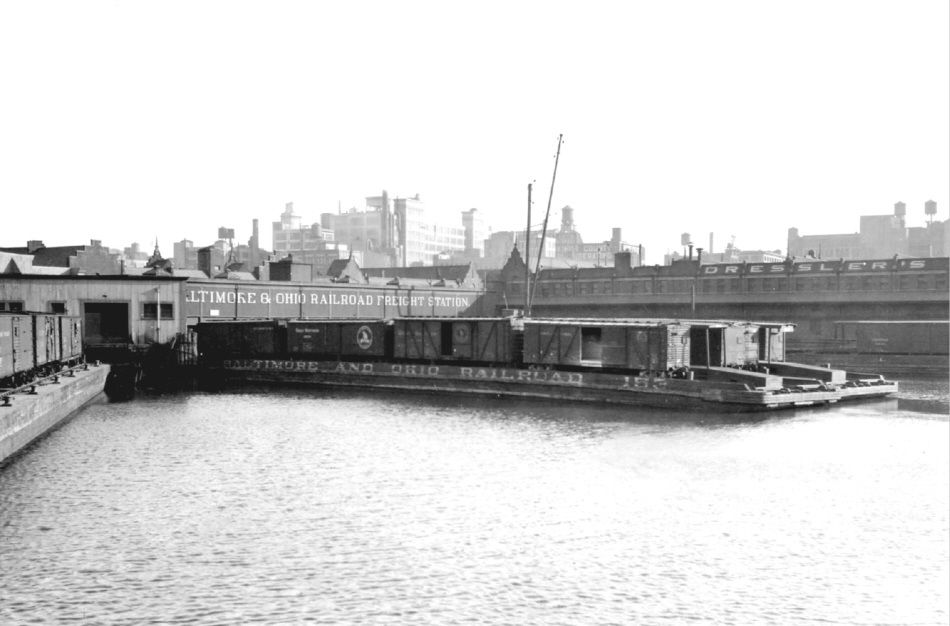 The following images, a zoom in from a Brooklyn Navy Yard Archives images, shows the "basin end" of the Pennsylvania Railroad's pier station at the Wallabout Union Freight Station. Note the station carfloat through the lattice legs of the crane. 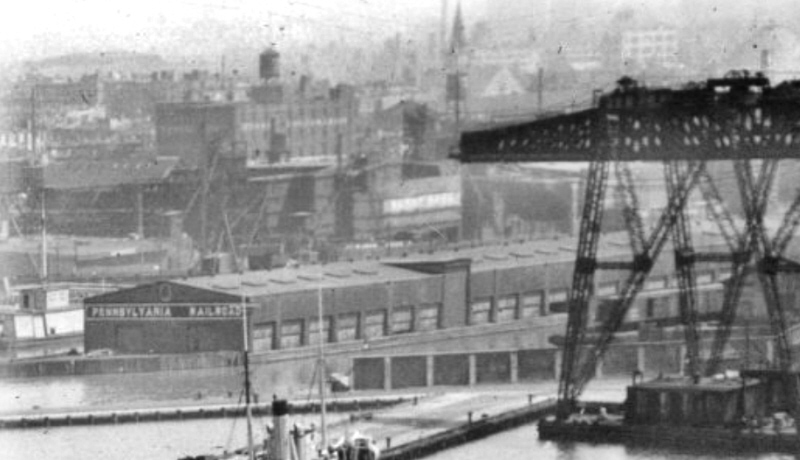 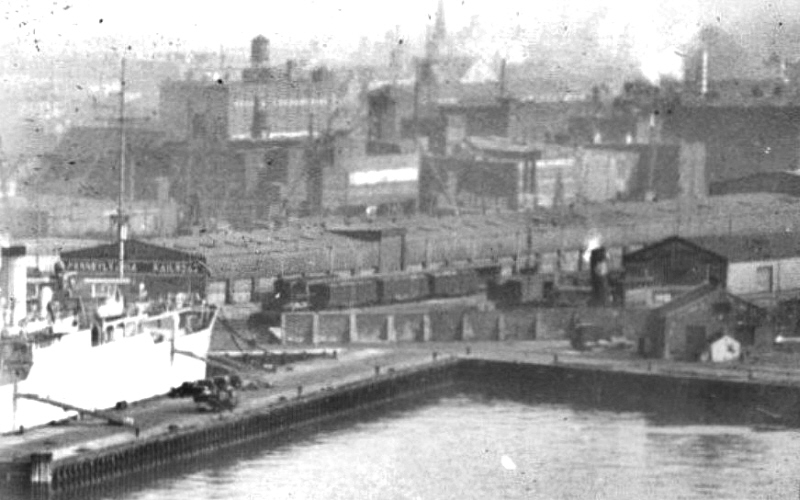 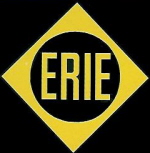 This facility will be located on this page until more information is discovered,
and at which time a separate page is warranted. 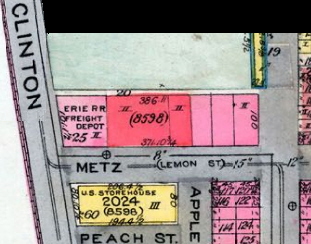 The Erie Railroad maintained a freighthouse at the head of the Wallabout Basin on the south bulkhead and on the northeast corner of the intersection of Metz Street and Clinton Avenue.

Extremely little information has been located about this facility to date.

According to the "Report of the Committee on Terminals and Transportation of the New York State Food Investigating Commission" published April 18, 1913; the Erie "Wallabout Station" freight house had a capacity of 10,000 square feet.

We also know it existed at the time of publication of the Terminal Facilities Map of 1940 at the top of this page.

The following image (cropped and enlarged from the original negative, was acquired from the estate of the late Frank Zahn. While the photographs subject is the Brooklyn Eastern District Terminal locomotive, it does show a portion of the Erie Railroad Wallabout Freight Depot between the front of BEDT #15 and the truck facing the photographer. Just under the awning and to the right of the tank truck, a sign can be made out "ERIE R" 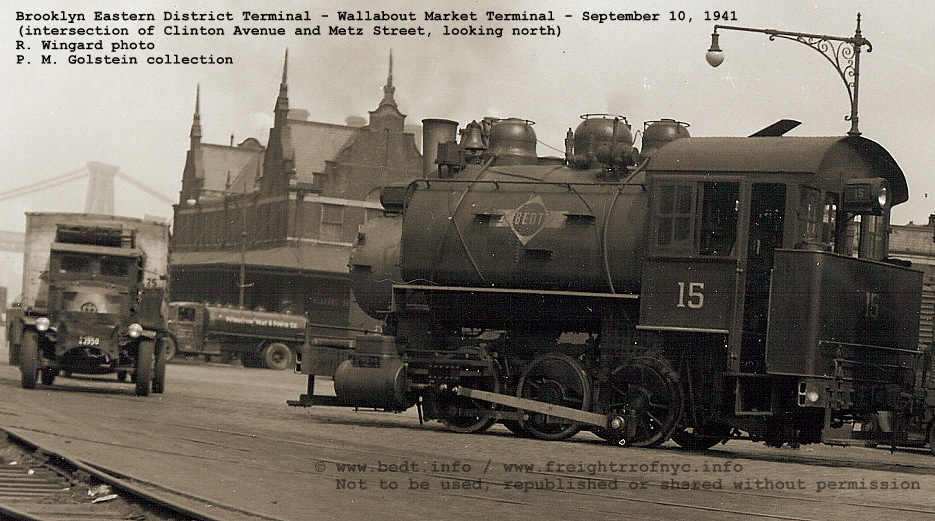 The photo below, courtesy of the Brian Merliss archives (brooklynpix.com); shows a Brooklyn Eastern District Terminal tugboat heading out the Wallabout Basin with a loaded carfloat. While the tugboats name cannot be seen, the sideboards on the carfloat are marked Brooklyn Eastern District Terminal. This image is included here as this photo was taken at the very head (south bulkhead) of the Wallabout Basin where the Erie Railroad Freight Station was located. The photo was either taken from atop of a boxcar loaded aboard a station carfloat or out a second sotry window of the Erie Railroad Freight Depot. The pier occupied by the Lehigh Valley Railroad (Pier 5) is the pier with the doors on the right side of the image. 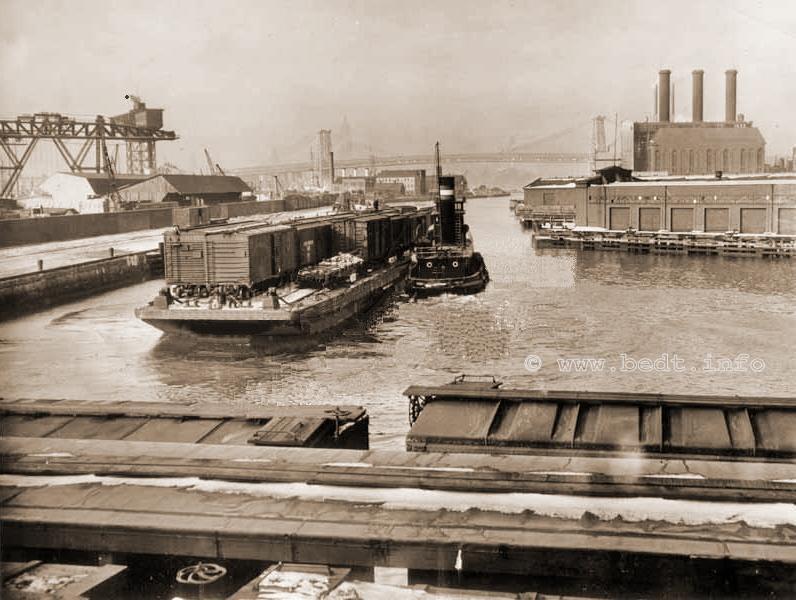 Closure of the Wallabout Terminal Market

The Wallabout Market Terminal operated until very late in 1941 (sometime between September through November), at which time the Wallabout Terminal property was taken over by the United States Government.

The United States Government had declared on April 1, 1941 that in the process of expanding the Brooklyn Navy Yard (perhaps in preparation for the United States' entrance into or at least the material support of its Allies in World War II?) and as such, the properties of the Wallabout Market Termial including the Brooklyn Eastern District Terminal, the other railroad tenants as well as the produce vendors in the Wallabout Market; were apparently "bought out" by the United States Government. One by one as the tenants moved, their property would be seized and the structures razed.

It is understood by reading some of these lawsuits, that the Wallabout Terminal property was "annexed" (read: commandeered) by the United States Government and that there was little choice the individual tenants (including the BEDT) had about it, other than taking the Government money and moving on. When the Wallabout Property was annexed, the Navy Yard property boundaries were expanded to absorb this new addition of acreage. Several lawsuits were brought pertaining to payments, interest and and other assorted legal quibbling and some of these lawsuits extended into the 1950's.