In January 1895, James & Henry Nesmith sold the Empire Stores property along the East River to the Brooklyn Wharf & Warehouse Co.

In 1899, a five year pier and warehouse expansion project is undertaken, and would eventually come to occupy the location that is now known as "DUMBO", which is an acronym for Down Under Manhattan Bridge Overpass.

This property today consists of many historic buildings, (most of which still stand!) of which were built for the expanding ship traffic being received in Brooklyn. Some of these structures were also used for tobacco inspection and general manufacturing in the day.

According to the Brooklyn Daily Eagle Almanac of 1901, located by Joe Roborecky in Google Book Search; the Brooklyn Wharf & Warehouse Company operated the Atlantic Basin Facility at this time:

Under the control of the Brooklyn Wharf & Warehouse Company, is situated near the Hamilton Ferry, nearly opposite of Governors Island. Vessels can enter it in any stage of tide. It covers an area of 40 acres, has brick and granite warehouses on three sides and contains four piers, besides the two bulkheads which form the basin and are known as the North and South piers. Three of the inside piers are covered and are 700, 800 and 900 feet in length, respectively, by 75 and 85 feet in width. The largest, designated as South Central, is the most extensive in this port.

A float bridge with railroad tracks enable the transfer of cars brought by floats from any railroad terminal on the harbor to the tracks which ramify each pier of the bulkhead and basin. The freight  thus brought is thereby delivered to storehouse or vessel without bulk being broken between shipment and delivery. This basin is the largest grain depot in the world and is equipped with seven elevators. Its frontage line of bulkheads and piers measure three miles. The entrance to the basin is 200 feet wide."

In July 1901, the New York Dock Company would file in Albany, NY a certificate of incorporation after the purchase and reorganization of the Brooklyn Wharf & Warehouse Co.

Unfortuantely, not much is known in the way of the trackage layout for Brooklyn Wharf & Warehouse.

The following article was discovered within the Official Proceedings of September 1900 for the monthly meeting of the Western Railway Club. In this discussion, it specifies the design of the trackage, as well as how the locomotive is used at the Brooklyn Wharf & Warehouse:

As far as can be told, only one locomotive would be transferred to New York Dock (#4) upon their purchase and take over of the Brooklyn Wharf & Warehouse properties and assets.

The image below of locomotive #2, shows it is as built by Baldwin Locomotive Works as a "steam dummy", with a faux street car shell over the locomotive and reciprocating machinery to prevent the frightening of horses. 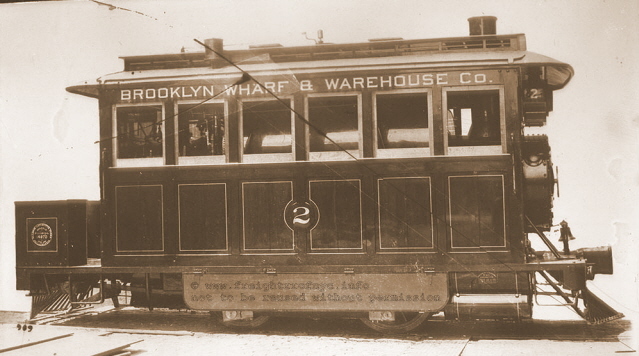 The New York Times article also stated that the "vessel rounded the course towards Governors Island". This led me to believe it was enroute to Fulton Terminal of the Brooklyn Wharf & Warehouse which is just north of Governor's Island. I thought that if the vessel was enroute to South Brooklyn where Brooklyn Dock & Terminal was located, it would not need to be near Governors Island. So I concluded (erroneously) that the vessel belonged to Brooklyn Wharf & Warehouse.

However, recent documents show that David S. Arnott owned the property that the Brooklyn Dock & Terminal was situated upon.

Therefore, D. S. Arnott data has been moved to that page: 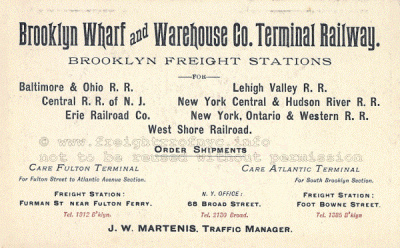