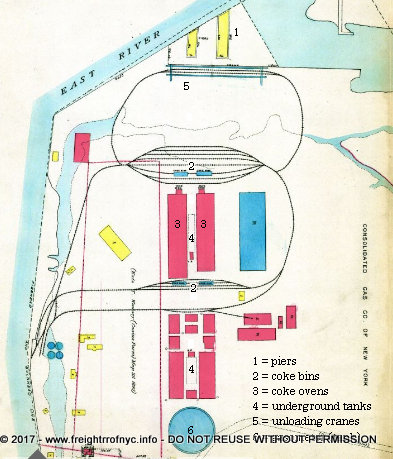 .
Astoria Light, Heat and Power was a wholly owned subsidiary of the Consolidated Gas Company. This facility was a gasification plant used to make illuminating gas out of coal tar. Astoria Light, Heat & Power was located at what is now the foot of the Hell Gate Bridge on the Queens side and was first organized in 1893. Construction began on and around Barren Island  in the northwest corner of Queens in 1903. It involved the very impressive undertaking (at that time) of relocating five million cubic yards of dredging and other waste materials into wooden timber and stone revetments along the East River. At time of completion of two of the four gasification units, this plant was capable of generating 24 million cubic feet of gas per day.

Throughout the ensuing years, Brooklyn Union Gas (now Keyspan Energy) would purchase and consolidate all of the gasification plants on the east side of the East River. Eventually, gas brought in from Texas via the Transcontinental Gas Pipe Line in 1955 eliminated the need for gasification plants and in 1960, the Astoria Light, Heat & Power plant was closed.

My original hypothesis for railroad operations was that the standard gauge (56˝" or 4' 8˝") locomotives interchanged with a Class One railroad or by possibly a floatbridge, to receive cars containing coal for gasification; and the narrow gauge (36") locomotives removed ash, cinders, clinkers and other waste from the furnaces. This is now understood to be partially incorrect.

The actual method of receiving coal was by barge, unloaded by massive electric gantries into either storage piles or directly into standard gauge 50 ton hopper cars, which would transport the coal to the coke ovens. The narrow gauge operations, as far as can be ascertained, is correct.

"Electric gantry, with 2 ton automatic grab bucket."
Average capacity, 125 tons per hour. Length of boom, over all, 192 feet 6 inches. Coal taken from [illegible] and delivered either to standard railroad cars, via 50 ton hoppers, or to storage space, via inboard leg boom.
Two such gantries in operation, controlling a length of 715 feet along the bulkhead."
unknown photographer
photo from Water Terminal & Transfer Facilities, US ACoE - 1913

Since 08 April 2008; this webpage had not undergone any updates as nothing was found or come across. Then on 21 June 2010, I receive an email from Jim Guthrie containing a scan of the 1924 Port Facilities Map of New York, of which this plate specifically showed the Astoria Light, Heat & Power trackage.

This is the most accurate rendering thus far of the trackage at this facility: 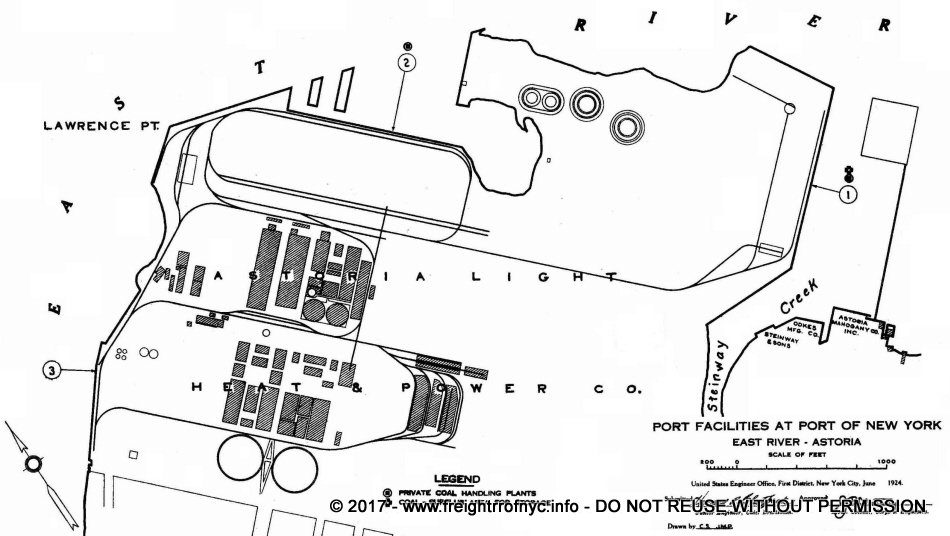 Recently, several images of Astoria Light, Heat & Power were added to the online digital archives of the Museum of the City of New York., as part of the Wurts Brothers collection. There are interior shots of the gasification ovens, as well out exterior images of the rail operations. Naturally, these exteriors shots of the railroad operations are what are of interest to us.

The means of coal transfer at Astoria Light Heat & Power was very interesting to say the least. From examining the images, it appears coal was transferred out of the barges into piles. This was expected. What was not realized was the versatility of the overhead gantries, meaning that not only could the gantry unload the scow directly to coal pile but also from scow to rail hoppers (skipping storage in the coal pile), or if a barge was not present or being unloaded, transfer of coal from the pile to the rail hoppers.

If this author is understanding the very first image below, if appears that storage was a completely separate operation from transport & feeding the ovens. A train would need to be loaded by the overhead gantry adjacent to the coal piles, then hauled along the loop tracks to the bin tipple where the coal was dumped into chutes between & under the rails. It then appears it was hoisted up into the coal elevators, which then fed conveyors into the plant retorts itself. After the gasification process took place, coke came out. The best  and simplest way I can explain how this process happened was that you "cooked" the coal under pressure, instead of burning it outright.

After the coke came out, it would be hauled to another pile.

The only question that remains unanswered is why not run the conveyors right to the coal piles so the gantry could feed the conveyors directly and skip the railroad operation?

Then it occurred to me, I thought I had purchased a multipage article on the operation of the Astoria Light, Heat & Power. Now if only I could remember where I put it! Needless to say, I located it and ran it through the scanner. I have only scanned the page showing the overall layout, as the remainder of the pages were drawing of the individual chutes, buckets, conveyors and other apparatus.

Also, I left the scan large so the coal / coke handling process can be reviewed. 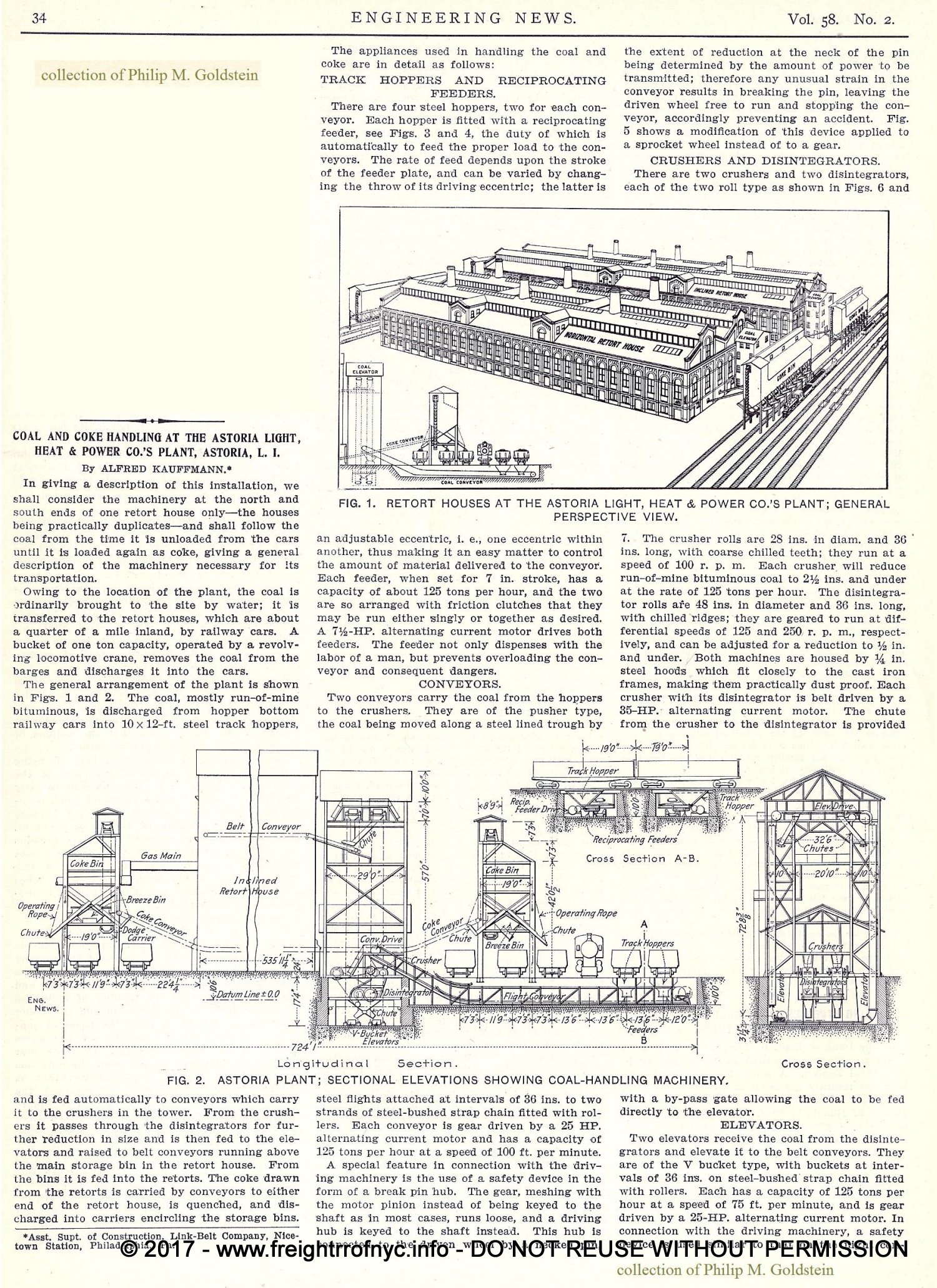 After reading that article and reviewing the diagrams, we now have a better understanding of the process and what is taking place in the following image:

Recently searching the web for information on this facility, I came across a Lionel K-Line 'O' scale model of an H. K. Porter 0-4-0T in Astoria Light, Heat & Power livery. While I am not a Lionel / O Scale fan, I do freely admit to being very amoured with this little engine on historical principals. But, I could not help but wonder if the model is actually a prototypically correct design copied from a drawing or photograph. So, I have to ask, where did Lionel get the idea from? If any of you know of a photo of the real engine, please get in touch with me! 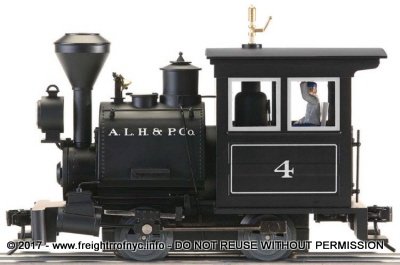 Fortunately, at least one photograph of a real Astoria Light, Heat and Power locomotive is known, and that being of #5. Ironically, this locomotive would go on to become Brooklyn Eastern District Terminal #16:

The following was submitted by Eric Neubauer:

While looking for information on this company, I came across your webpage.

Standard Steel Car built hopper cars for this company at least as early as 1906. Multiple orders were involved and builders photos exist of two. The numbers started around 100, but compilation of a roster is impossible.

One of your photos shows 144 which is older than the lower numbers and likely second hand. They also had at least two box cars built new in about 1911 or maybe 1914.

At (the) least AHL&P 101 had air brakes when new, but I don’t see and evidence of air brakes in the photos.