Brooklyn Dock & Terminal was one of the earlier "offline" rail terminals to be located in Brooklyn.

Upon discovery of the above New York Times articles by the author, we now know it was incorporated in April and organized in May of 1899.

Brooklyn Dock & Terminal was located between 25th and 26th Streets, west of Third Avenue in the Sunset Park section of Brooklyn. It occupied a peninsula of land, that if connected to the surrounding land, would have extended west to First Avenue had those avenues bridged the basins of water to the north (25th Street Basin) and south (26th Street Basin) of the actual terminal property.

Brooklyn Dock & Terminal would not have a track connection to any other railroad in its proximity, even though a Bush Terminal yard was only three short blocks away on 28th Street.

The E. Belcher Hyde Property Map below, even though dated 1916; still carries the Brooklyn Dock & Terminal name (the Delaware, Lackawanna & Western Railroad had purchased the property in 1906).

In any case, this property map is the closest approximation to a track diagram that has been located to date. While the trackage shown on property maps cannot be held to the highest level accuracy, we can with a degree of reliability, use them as references for structure locations.

In this property map, we see the original location of the coal pocket was along the south property edge, with what appears to be the freight house along the north property boundry.

According to the Annual Report of the Department of Docks and Ferries, New York, the Brooklyn Dock and Terminal submitted a several plans for a coal trestle with coal storage. These requests were approved on several dates from July 18 through August 17, 1899. This yard would go on to service a rather large and unique coal dock, eventually belonging to the Premium Coal Co.

The following image (taken from upon the coal trestle and looking west), is from a post card issued by the Brooklyn Eagle newspaper. The postcard was mailed on July 9, 1900; so we know the image was taken before the Delaware, Lackawanna & Western RR purchased the facility in 1906. 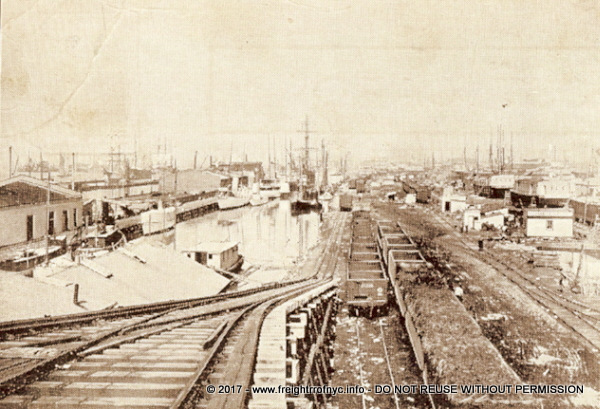 This coal trestle approach ramp looks to be quite steep, and it appears it would require some effort on the part of the locomotive to ascend the ramp with a load. At the top, the hopper / gondola car full of coal would enter the facility and at this time after being spotted over the coal chute, the cars would dump their load to the coal silos below.

Also in July of 1899, the Brooklyn Dock and Terminal submitted a request for a freight terminal at this yard as well. This request was approved as well.

Brooklyn Dock & Terminal had a single two track floatbridge and would receive various commodities, the majority of which being coal.

Please refer to that page for the history of this facility after 1906: 25th Street / South Brooklyn Terminal (DLW)

According to Baldwin Locomotive Works builders records, two locomotives from this builder were acquired by and operated for the Brooklyn Dock & Terminal.

The first locomotive to be acquired by the Brooklyn Dock & Terminal had a rather unusual wheel arrangement of 0-6-2T, and this locomotive was purchased second hand from the Norfolk & Western Railway, (formerly their number 93).

For quite some time and upon extensive searching of the web, no images of this locomotive could be located. This author then contacted the Norfolk & Western Historical Society on 18 January 2009. The following day, Jim Blackstock replied and furnished the image below, for which we should be grateful.

Take note of the overhang on the pilot and long smokebox, valve wheel in front of steam chest, large oil headlamp, unusual bell mounting location, small saddletank, splash shields over the wheels and ornate gold leafing on the locomotive. It would be most interesting to find out if Brooklyn Dock & Terminal kept this appearance!

The second locomotive, was purchased new and built for the Brooklyn Dock & Terminal. This locomotive was of more conventional 0-6-0T wheel arrangement, and was equipped with sloped side tanks to increase engineer visibility. 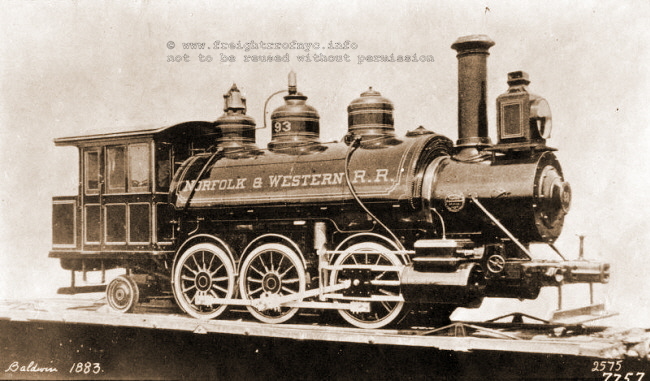 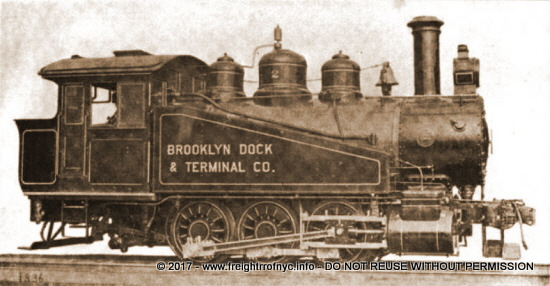 The tugboat "D. S. Arnott" was incorrectly identified previously as being owned by the Brooklyn Wharf & Warehouse.

The New York Times article also stated that the "vessel rounded the course towards Governors Island". This led me to believe it was enroute to Fulton Terminal of the Brooklyn Wharf & Warehouse which is just north of Governor's Island. I thought that if the vessel was enroute to South Brooklyn where Brooklyn Dock & Terminal was located, it would not need to be near Governors Island. So I concluded (erroneously) that the vessel belonged to Brooklyn Wharf & Warehouse.

However, recent documents show that David S. Arnott owned the property that the Brooklyn Dock & Terminal was situated upon.

Therefore, "D. S. Arnott" vessel data has been moved to this page.

On 04 June, 2009; a New Times Article dated May 5, 1897 has been located leading to the discovery of the tugboat "D. S. Arnott" in the employ of the Brooklyn Wharf & Terminal, which was involved in a collision in New York Harbor.

After 1906, this terminal would serviced by the tugboat / carfloat fleet of the Delaware, Lackawanna & Western Railroad.