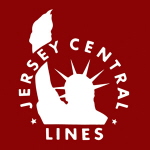 Just when you think you have heard of them all, up pops a new offline terminal location!

On 09 December 2012 at a little after midnight, I received an email from Larry Tesar of the United Kingdom, asking me if I knew anything about this location, and a link embedded in the email. Well, I open the link and I find myself looking at Plate 6 of the 1899 edition of G.W. Bromley & Co. Property Map.

And to what to my tired eyes should appear? A previously undocumented offline terminal in Manhattan. Well, I was flabbergasted to say the least!

Other than these Bromley Property Maps shown below, I have so far come across nothing directly referencing this location.

The Central Railroad of New Jersey (CRRNJ or CNJ) was not new to carfloat operations, but how did this one escape our notice until now?

According to research by Tom Flagg, the first carfloating terminal in Manhattan was Central Railroad of New Jersey at Pier 14 in conjunction with the Pennsylvania Railroad. This was a Pier Station (not an offline terminal) and was located much further south at Liberty Street (in the vicinity of the current Battery Park City).

As can be read in "History of the Pennsylvania Railroad", by J. Elfreth Watkins, 1896;

The Empire Transportation Company's line was organized in 1866, it (the Pennsylvania Railroad) wished to deliver to Manhattan and since the Pennsylvania Railroad did not reach or have a terminal at that location, it contracted with the Central Railroad of New Jersey, which did build the first carfloat for that purpose. Early in 1867, the operation began with the first carfloats carrying those freight cars across the Hudson River. The "car-ferry" route was from Communipaw, NJ Terminal to Pier 14, on Manhattan's west side, which was occupied at the time by the Central Railroad of New Jersey.

Now this explanation clarifies why both the Central Railroad of New Jersey and the Pennsylvania Railroad have taken credit for the first carfloating operation, and why both have been stated in various sources that they served Manhattan's Pier 2. Furthermore, this explanation coincides with the mention in the Trenton Daily State Gazette...

Pretty much about the only thing we know about this location, is its size and location on the West Side and the approximate dates of operation.

The earliest reference I can find to this location is on an earlier issue of G. W. Bromley Property Map, 1897. Unfortunately, no trackage or float bridge is shown. But, now the west half of Block 687 is shown as a conglomerate of small individual lots devoid of structures, and clearly marked for "Freight Yard Central RR of N.J".

Pier 4; is also clearly marked for Central R.R. of New Jersey is shown as well (with the same dimensions as the 1899 map below, but oddly with a different [smaller] perspective scale):

By the 1899 edition of this property map, trackage and float bridge are shown, and the trackage is not of a very complicated layout. If the layout it accurate, it was a simple "pull and shove arrangement, with no provisions for a run-around track.

There appears to be a long structure (freight house?) marked for three stories approximately mid block. If this in fact a freight house, it is oddly not parallel to the track.

1899 - G. W. Bromley Property Map
Click on the above map for a large size version of a map.
NYPL Digital Archives
added 09 December 2012

During a search through Google Books, I located the following: 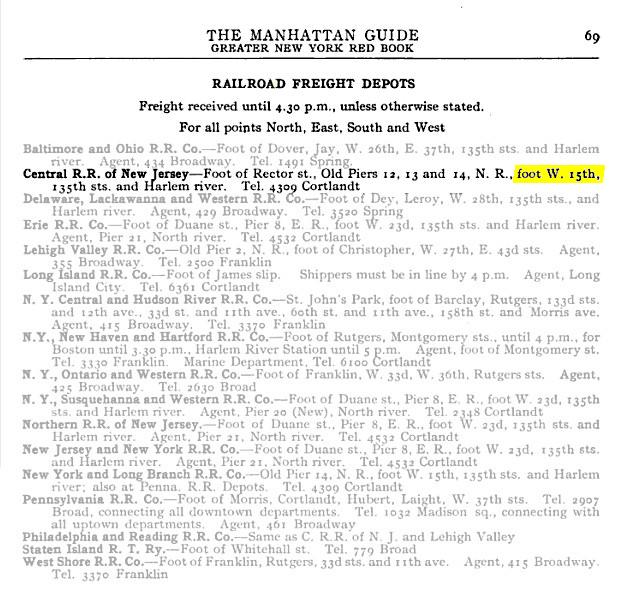 Also located within Google Books, is the Annual Record of Assessed Valuation of Real Estate of Corporations, the City of New York, 1906. It shows the Central Railroad of New Jersey occupying Block 687 in 1906: 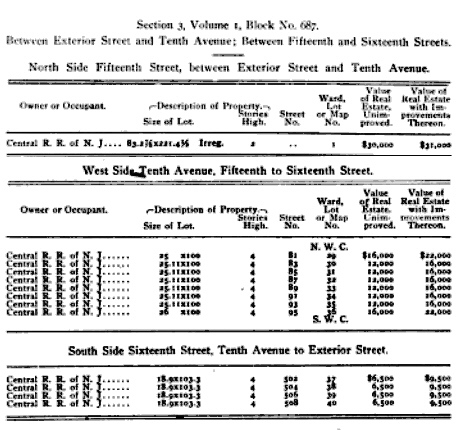 Further research has revealed that the area was extensively redeveloped in 1909 / 1910. The final year of service for this location has not yet been determined, but by the 1911 edition of the G. W. Bromley Property Map (seen below); the Freight Yard, Pier 4 [old], and the float bridge has been obliterated for a new wider bulkhead thoroughfare. .

Also, as part of this reconstruction, new wider and longer piers were constructed with a new orientation (now magnetic east-west as opposed to geographical east-west as seen in the 1899 property map above), and the piers being directly perpendicular to the bulkhead, instead of slightly skewed. Also, pier numbering was changed at this time: note in the map below, that Pier 7 is also numbered Pier 58. This higher numbering is the system that is currently in use to this day.

As a result of this reconstruction, the property of Block 687 was foreshortened by approximately some 600 feet:

Therefore, we I think we can safely conclude the West 15th Freight Yard had been razed by this date.

By the 1924 edition (which is shown here purely for reference); the National Biscuit Company occupies the entire foreshortened Block 687 with a single factory. On an interesting note, this structure would come to be serviced by a second story spur off the New York Central "High Line" after the High Line was constructed circa 1930's.

Unknown at this time, but assumed to be a wood Howe Truss Bridge, typical of that era of operation.

Unknown, but obviously steam powered. Most likely a tank type locomotive as well, but uncertain.

Special Thanks to Larry Tesar (?) for alerting us to this location!