.
From what has been able to ascertained, there had been a proposal begining 1911 to link the Bay Ridge 65th Street Yard of the New York, New Haven & Hartford / Long Island Rail Road, the Brooklyn Army Terminal, Bush Terminal, the 25th Street Terminal of the Delaware Lackawanna & Western and the three terminals (Atlantic, Baltic and Fulton) of the New York Dock with an elevated rail line, similar in construction to the mostly elevated "Highline" of the New York Central along the West Side of Manhattan of the 1930's.

Included in this proposal, as well as connecting the above existing terminals; would be the construction of one, possibly several, new terminal stations along the route.

Recently acquired (May 2021) by the author is this map of a proposed Railroad & Warehouse Terminal Development - Gowanus Section dated from 1911; which is about the date the South Brooklyn Terminal Railway / Brooklyn Marginal Railway was proposed. It is believed this map was associated with that proposal.

Note the property of this terminal extends from 28th Street to 36th Street, (which would come to be the home of the US Navy Fleet Supply Base). Also note the property is book-ended at both the north and south ends by float bridges. 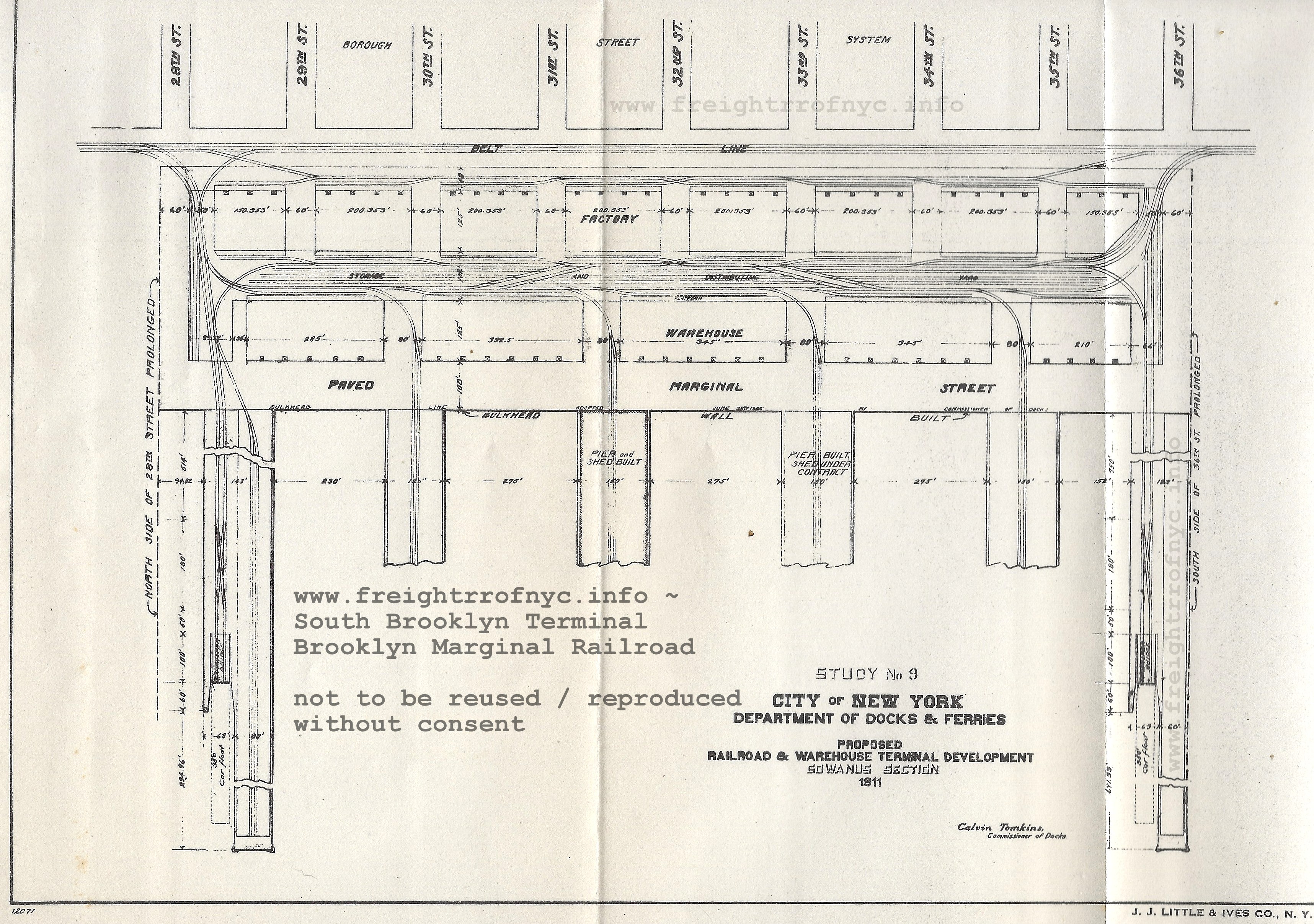 In 1913, the Committee on Water Front Improvement posted a letter to his honor, the Mayor William Gaynor extolling the virtues of the Brooklyn Marginal Railway:

Joe Roborecky, upon searching Google Books; came across the following multipage article in the Bulletin of the Merchants Association of New York "Greater New York" dated April 6, 1914, where it states the various terminals located in Brooklyn on that date, and at the conclusion of that article; mentions the proposed "Brooklyn Marginal Railway", (which in later documents is then referred to the South Brooklyn Terminal Railroad):

..
.
According to the "Municipal Year Book of the City of New York of 1916" and the "Joint Report with Comprehensive Plan, 1920"; there is also mentioned this proposal to construct a marginal railroad from 65th Street in Bay Ridge along the shores of Upper New York Bay (east bank), crossing the Gowanus Canal, and along the east bank of the East River and to Brooklyn Bridge.

Per the suggestion of its "Committee on Terminal Improvements and the Commissioner of Docks" dated June 6, 1913, the Board of Estimate and the Apportionment of the City of New York adopted a plan known as the "South Brooklyn Terminal Railroad" on July 30, 1914.

It was intended that by building such a railroad, it would have connected the following:

As a matter of record, $9,000,000 was appropriated for its construction, with most of the money being expended for right of way, but no construction followed. This marginal railroad was to be 5 1/2 miles long and to have both float bridge and rail connections.

It was primarily to be routed through Furman, Columbia, Van Brunt, Van Dyke and Halleck Streets, Second Avenue to 36th Street then First or Second Avenue to 65th Street by either street railway or elevated, similar to the New York Central "Highline" on Manhattan's West Side.

In response to a request of the committee, another committee representing all the trunk line railroads entering the Port of New York had submitted a plan for the joint corporation which would operate this "municipal" railroad on a rental basis.

At this time however, due to a law prohibiting railroad companies from owning securities of terminal companies, it was necessary for Legislature to pass an enabling act to permit and exception in this case. Bills were passed in 1913 and 1914, but it was not until 1915 did it receive the approval of Governor Charles Whitman. Changing financial conditions resulted in the Trunk Line Railroad Committee to withdraw their offer.

It was hoped that the lure of greater efficiency and wider choices of freight terminals along the proposed route would attract interest, and the Board of Estimate reserved a portion of the New York City borrowing margin for this proposal, in the hopes it could be constructed by 1929. As we all know, that is when the Great Depression struck. Other than these two published reports, I have be unable to locate any documentation on why the proposal was withdrawn and when.

Had this proposal been seen through to completion, and having being operated by the trunk line railroads, it does not take a great deal of thought on what would have happened to Bush Terminal and New York Dock, as they most likely would have been bought out or absorbed by a Class 1 railroad.  ..

Paul Strubeck submitted the following. It is a full page spread in the New York Times, July 19, 1914 issue. I have left it in .pdf format (you'll need Adode Acrobat Reader to view), so you will be able to zoom in on the text and read clearly. Use your back arrow on your browser to return you here:

As we have come to see, this proposal went no futher, and the this marginal railroad never constructed. The property to have been developed at the terminal yard was instead leased to the US Navy, and their Fleet Supply Base constructed instead shortly after this proposal, and of which in itself was short lived.