Rikers Island serves as the City of New York's main jail facility, but it is also the name of the 413 acre island on which the jail sits. Rikers Island is located in the East River between the boroughs of Queens and Bronx.

While the island itself is considered part of the borough of the Bronx, it is included as part of Queens Community Board 1 and has a Queens postal ZIP code!

The island is believed to be named after a Dutch settler by the name of Abraham Rycken. Rycken moved to Long Island in 1638.

The Anderson Zouaves were commanded by John Lafayette Riker, who was related to the original owners (the Ryckens) of the island. The camp of the Anderson Zouaves was named Camp Astor in compliment to millionaire John Jacob Astor Jr. who provided funding for the army, and who appears to have made a significant contribution to the raising of the Anderson Zouaves in particular, with the Astor ladies being credited with the manufacture of the zouave uniforms worn by the recruits of this regiment.

Rikers Island was subsequently used by numerous other Civil War regiments, but the name "Camp Astor" was specifically used in reference to the Anderson Zouaves and did not become a general name for the military encampment on the island.

Abraham Rycken's descendants owned Rikers Island until 1884 (some references cite 1881), when at such time it was sold to the City of New York for the amount of $180,000. At this point, the island land was used as a jail farm, and it has housed a jail ever since. The jail facility was commonly referred to by New Yorkers as simply "The Island".

At the turn of the century, the city of New York began to haul rubbish to the island for the intent of landfill and expanding the island; which until this time, was not much higher than the high tide water level. This method of dumping rubbish for land fill and thereby expanding the landmass was common of that era, as the same method was used to fill in Barren Island in Brooklyn and Fresh Meadows / Corona of Queens, and where similar railroad operations were used to haul the rubbish (the Brooklyn Ash Removal Company).

"While NYC Correction staffers and ex-staffers, whether uniformed or civilian, are well aware that Rikers Island is mostly man-made, having been been expanded more than fourfold from solid waste dumping and leveling, far fewer realize the extensive role that other landfill operations have played in the city's penal history.

The first Tombs prison was built on filled-in site of the Collection. According to the Reconnaissance Mapping of Landfills in New York City study by environmental remediation expert and Columbia University professor, Dr. Daniel C. Walsh:

“For the first 15 years of the 20th century, numerous landfills fed by barge-loads of waste from Manhattan and the western Bronx are identified in the [landfill] literature [study]. Barge-fill sites are identified in figure 3 in the Bronx (Rikers Island, Hart Island and Cromwell Creek)...

"By 1924, all barge-fed landfill operations were consolidated at Rikers Island...

"During the 1930s, 17 million cubic yards of waste fill was transferred from Rikers Island to northern Queens to build LaGuardia Airport. The 1934 World Fair site was built on 1,200 acres of filled wetland in Flushing, Queens...

”Barge landfilling operations continued at Rikers Island through the early 1930s. Unlike other city landfills, which were filled to a height that usually did not exceed 10 feet above sea level, Rikers Island Landfill was mounted as high as 125 in the eastern fill area...

While "Rikers Island" is hand written on the Hertzendorf collection snapshot, the boat bears the name "Sanitation." Perhaps its main work related to the island during the era of the photos; perhaps they were taken while aboard it.

In 1943 the bargefill operations were moved from Rikers Island to the Great Kills Marsh on the southern shore of Staten Island....”

Interestingly enough, the entries for the steam locomotives have them attributed to the Street Cleaning Department (the predecessor to the current Department of Sanitation of New York).

In 1932, the city opened a jail for men on the island to replace its dilapidated jail on Blackwell's Island (a/k/a Welfare Island, now Roosevelt Island).

Landfill was again added to Rikers Island in 1954. This enlarged the island from the original 90 acre footprint island to 415 acres, and thus enabling the jail facilities to expand.

The original penitentiary building, completed in 1935, was called HDM or the House of Detention for Men; it became a maximum security facility called the James A. Thomas Center and closed due to structural issues in 2000.

For the in-depth histories of the jails and the Corrections Department, I respectfully refer you to New York City Department of Corrections website.

To dates, a list of contractors known to have worked at Rikers Island are:

During the time of the first Rikers Island land expansion around 1900, many photos and even an Edison film exist of the workings. In these photos, several small steam locomotives can be seen, along with 4 wheel side dump construction cars.

Since the work that was being accomplished was landfill, it can be presumed that the track configuration would change as needed (and as one area would be filled in, the track would be picked up and relaid to another unimproved area) to begin the process of landfilling at the new location.

In searching the New York Public Library Digital Archives, I happened across on really good photos of a steam locomotive (see image below) and two images of trackage: 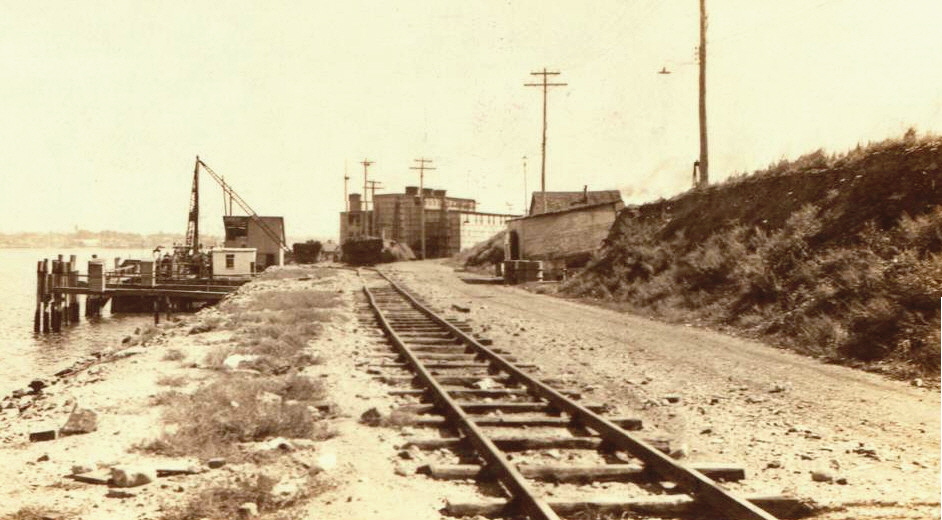 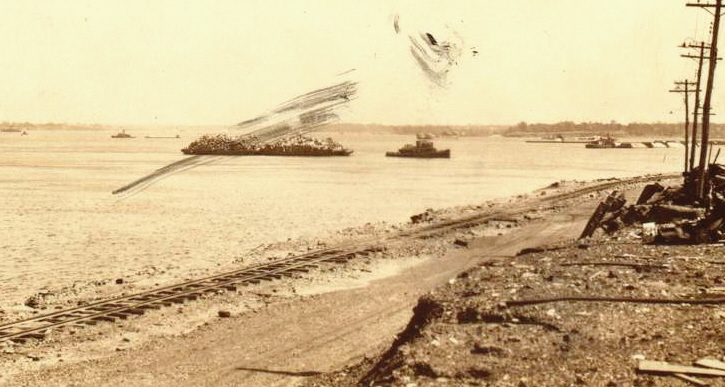 .It is not known at this time, on what exact date railway operations ceased on Rikers Island.

This first link is to a YouTube video of an Thomas A. Edison (yes, that Thomas Edison) motion picture. The date attributed to the film is May 20, 1903.

In this motion picture, several locomotives and trains can be seen: YouTube - Library of Congress: Edison Film - Rikers Island, 1903

The Library of Congress summary for this film reads:

The film was photographed from a boat going around Riker's Island.
Located on the East River north of Hell Gate between the Bronx and Queens, Riker's Island was the site of a massive New York City landfill operation at the time of the filming (originally eighty-seven acres, by 1939 the size of the island had increased to four hundred acres).
The film includes scenes of heavy equipment at work, including pile drivers constructing the seawall and steam shovels unloading rubbish from barges.
On one of the steam shovels, a sign reading "Water Front Improvement Co., 220 Broadway, New York" can be distinguished.
Near the end of the film, a narrow-gauge steam engine with five open cars loaded with landfill, comes into view.
The island is currently the site of a New York City penitentiary.

The following images are from The New York Correction History Society (NYCHS) website on the Rikers Island with the last (bottom most) images from New York Public Library Digital Archives:

By referencing the images and Edison motion picture above, we can see there were many locomotives located on Rikers Island., and all appear to be 0-4-0T. If you look carefully, the locomotive seen at the very beginning of the film even appears to have a Steam Dummy cab!

Now the Edison film is dated 1903, but all known entries for locomotives that I have located (attributed to Rikers Island / CoNY Dept of Street Cleaning) at this time start in mid 1920's.

If the date of the film is in fact 1903 (nd we have no reason to believe otherwise), then it can only be assumed at this time that we are dealing with two different groups of steam locomotives, corresponding to the two different eras of landfilling taking place on Rikers Island, with the first group being seen in the Edison film and the second group as listed below, post 1923 and of which were used in the second landfilling era of the island and construction of the new jails.

However, it is unknown of which manufacture the steam locomotives of the first landfilling period are, and whether they belong to contractors who were commissioned to perform the work (the most likely scenario), or the City of New York actually purchased the locomotives.