The history of Goodwin - Gallagher Sand & Gravel, began in Port Washington, NY (Nassau County) in 1906. As can be denoted by its name, their business pertained to sand, gravel and aggregates.

It was at this location, where it mined the sand left behind from the glaciers that formed Long Island. As it would turn out, sand mining would become the largest industry in Nassau County. One of the most prosperous of the mining ventures was known as Goodwin Brothers, which in time merged with and became Goodwin - Gallagher. The sand mined from Nassau County was used in the construction of the streets of New York City.

Goodwin - Gallagher over the years would expand its areas of operations with locations in Jersey City and from what I have learned through the photograph below; Long Island City; as well as absorb some of it's competition in Port Washington.

The following image, in the form of a 8" x 10" glass plate negative; was offered for sale on eBay in August 2008, where the description noted "East River Dock, Long Island City" and dated 6/6/1917. 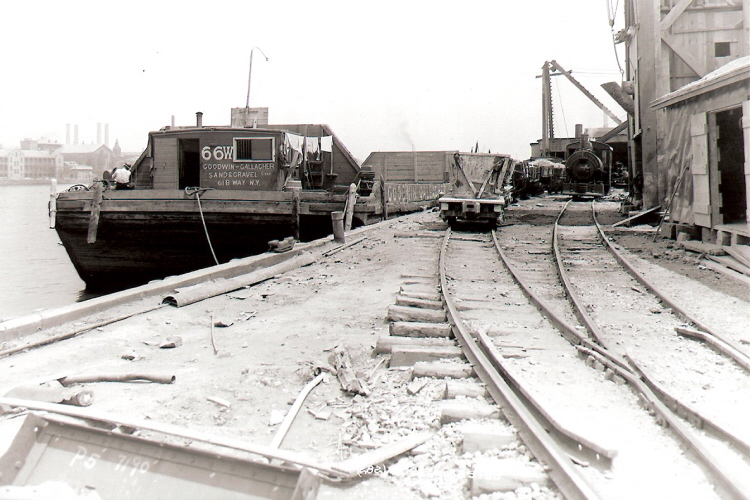 A web search of the Goodwin - Gallagher name turned up several articles of it's history in Port Washington, but no mention of it's installations in either Jersey City or Long Island City and while there is a extremely small possibility that this may not be a Goodwin - Gallagher facility, however this photo evidence leads me to believe there is.

Upon contacting the new owner of the negative, Roger McEnery; I inquired of the possibility of acquiring prints and enlargements of key items in the image. Roger was gracious enough to accomodate, by having hi resolution scans made and in my possession within 48 hours.

The structures across the river and to the left of the barge are the "Alm's Houses" located on Welfare Island (now known as Roosevelt Island and formerly Blackwell's Island). Many thanks to Judith Berdy of the Roosevelt Island Historical Society for identifying those structures for me! The steepled structure to the right of the Alm's Houses is the Chapel of the Good Shepard and the four smokestacks behind that is the Manhattan Power Plant  located at York Avenue and East 75th Street.

If this is indeed the case, and by rough triangulation of the field of view, then it is believed that Goodwin - Gallagher had their bulkhead location immediately north of the Queensboro (59th Street) Bridge. (That being ascertained by the photographer being in LIC, and on the east shore of the East River on the right and Blackwells Island on the left or west). Also, Ms. Berdy recalled images in her research of a sand dealer just north of the Queensboro Bridge, where the current Queensbridge Park is located.

She also goes on to state, there was extensive excavation work in the same vicinity for the 59th Street Subway tunnels (current "N" & "R" train). However, other images reviewed of the actual Contract 61 (N & R line) excavation work, show towering steel cranes on a turntable, that go down into very large (at least 40' x 40') vertical shafts excavated into the ground where the excavated material was unloaded into dump cars. The image above fails to show this type of vertical shaft and crane, and instead shows a silo type structure with dump chute. It is this structure that leads the author to believe this was a aggregate dealer not a construction/excavation site.

Also, the rear most dump car in the image above, (to the left and behind the locomotive) appears to say "N - G" under high magnification (image at left). You can also see this car in the enlarged image of the locomotive (below), along the extreme left edge of the photo. This N - G in all likelihood is from the name GOODWIN - GALLAGHER.

By all historical accounts referenced so far, state that the Goodwin - Gallagher was a dedicated aggregate supplier, and not a construction / excavation company, such as was the Degnon - McLean Company (which received the contracts to construct other subway and utility tunnels and suspension bridge towers and approaches during the same era.)

If you have any additional information, please do not hesitate to contact me at bedt14@aol.com. I would most appreciative of any information forthcoming.

The Port Washington Public Library website: www.pwpl.org; has a very nice historical accounting and collection of digital images pertaining to the history of the sand mining industry (including the Goodwin - Gallagher operation) in Port Washington. I recommend it's reading for those interested.
.

One of the his resolution scans of plate and "zoomed in" on the locomotive yields the number 4285 on the smokebox door (see below).

Unfortunately, H. K. Porter build records reflect that locomotive c/n 4285 was built in 1910 (before the picture was taken 1916, so the locomotive did exist at the time the photo was taken). This locomotive was built for a steel firm (Sharon Steel Hoop Co.) in Pennsylvania, and was also a 36" narrow gauge locomotive, (which was the gauge Goodwin Gallagher was operating their locomotives on (and which can be seen in the image below).

So while perhaps the true pedigree of the locomotive in the image below may elude us, it should be noted that Goodwin and later Goodwin - Gallagher did in fact purchase no less than twenty-three H. K. Porter, one Vulcan and two Baldwin locomotives during it's history. All locomotives purchased were 36" gauge and all were of 0-4-0T wheel arrangement.

But, from what we have been able to ascertain, the locomotive is indeed marked 4285 on the smokebox door and appears to be of H. K. Porter construction by the shape of its domes.

Unfortunately, the lettering on the side of the cab is illegible due to the angle, but it appears there is quite a bit of lettering.


Oddly, upon referencing the builders records in compiling the roster below, there were road number duplications: #5 and #6. Why this is, remains unclear. Also, there is no record on a locomotive bearing road number 2 in the records.

Further research by this author also uncovered the tugboats "Betty", "Queen Mab" which was owned by Goodwin Sand & Gravel Co. and "Gallagher" and "#14" of the Goodwin-Gallgher Sand & Gravel Co.

In the Mystic Seaport Museum, resides contract bids and unsigned agreement contracts dated 1908 and 1909 for the construction of 114" Deck Scows to be built by the Guildersleeve Shipbuilding Co. for Goodwin - Gallagher.